Oregon man kills his parents, girlfriend and infant at home 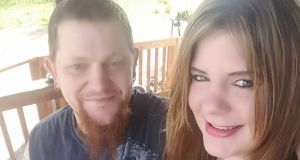 An Oregon man has killed four people including members of his family at the home they shared and was shot by sheriff’s deputies as he tried to kill a girl, authorities have said.

The victims had not been shot, the Oregonian reported. Sheriff’s office sergeant Brian Jensen said the causes of death will be investigated.

“We’re not sure what was used at this time,” Mr Jensen told reporters near the scene on Sunday.

“I’ve been told that there were numerous weapons, swords, things of that nature in the residence.

“The investigators are trying to determine what exactly was used to kill each person.”

The home is about 20 miles south of Portland and northeast of the city of Woodburn.

The sheriff’s office took an emergency call from a local resident at about 10.15pm on Saturday.

They found a woman dead outside the home, and the suspect attacking the girl. The eight-year-old is Ms Sweitzer’s daughter from a previous relationship.

A roommate also survived. She has suffered what deputies describe as injuries that do not appear to be life-threatening, and is being treated in hospital. – Press Association