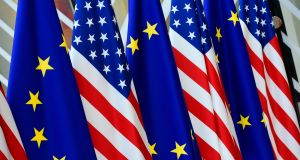 Perhaps the strongest sign the Trump administration is turning its back on Brussels is the decision to downgrade the status of the EU ambassador in Washington. Photograph: John Thys/AFP

Earlier this week members of Congress, officials and senior foreign policy experts squeezed into a conference room on Capitol Hill for a panel debate. The draw was not the latest twist in the government shutdown, or an announcement by Nancy Pelosi, but a more prosaic-sounding discussion on “EU and US relations in the 116th Congress”.

Things may be bleak when it comes to EU-US relations, but the event was a show of strength on the part of members of Congress, and a reminder that the transatlantic relationship still matters. Over the course of an hour, EU ambassador David O’Sullivan and other panellists discussed Brexit, Iran and Europe’s recent trade woes, in a conversation moderated by another Irish man, Thomas Wright of the Brookings Institution.

Afterwards, a festive atmosphere reigned at the relaunch of the congressional EU Caucus, a bipartisan group of representatives and senators who remain committed to the ideals of the European Union.

Donald Trump’s ascension to the presidency has heralded one of the most difficult periods in EU-US relations since the establishment of the European project.

Trump swept to power two years ago on the back of a nativist, isolationist vision of America, one that eschewed the multilateral vision that underpins bodies such as the European Union, Nato and the United Nations. A supporter of Brexit – in part due to his friendship with Nigel Farage – the president last year described the EU as a “foe” at least when it comes to trade.

He previously claimed the union was “set up to take advantage of the United States”, while he has repeatedly denounced Europe’s handling of the refugee crisis, singling out Angela Merkel’s policy for criticism.

Since taking office, he has broken ranks with the EU on several issues. He pulled out of the Iran nuclear deal, to the dismay of the EU which remains committed to the agreement. His decision to move the US embassy in Israel from Tel Aviv to Jerusalem was also opposed by Brussels, though some eastern European countries sent diplomats to a special embassy event marking the opening.

An indication of the seriousness of the breach in relations emerged at the Nato summit last year. According to several recent reports, Trump turned on Merkel at a closed-door meeting, haranguing the German chancellor over the level of European spending on Nato, to the extent that Lithuanian president Dalia Grybauskaite felt the need to step in and defend her European Council colleague.

The widening gulf between Washington and Brussels is not confined to the realm of foreign policy. On trade, the two sides have clashed repeatedly. The US president has long decried the huge trade surplus the EU runs with the States, with Germany and Ireland the chief offenders.

Apparently unmoved by the Europeans’ argument that the surplus relates to goods only and not services, Trump moved to impose steel and aluminium tariffs on EU exports last year, though a reprieve was granted following talks between the president and Jean-Claude Juncker in the Oval Office in July.

The threat of a 25 per cent tariff on car imports still looms – a development that would disproportionately affect Germany – with the EU keen to highlight that European car makers produce millions of cars in the US each year.

But perhaps the strongest sign of late that the Trump administration is prepared to turn its back on Brussels was the recent decision to downgrade the status of the EU ambassador in Washington – currently Dubliner David O’Sullivan, a highly experienced diplomat with decades of EU experience.

The change in status became apparent only when O’Sullivan’s name was not called in the usual order in keeping with diplomatic protocol at the funeral of George HW Bush last month.

The EU ambassador to the US has long been regarded as equivalent to national ambassadors, particularly since the establishment – under the Lisbon Treaty – of the European External Action Service.

This week, the chair of the House committee on foreign affairs, Eliot Engel, wrote to secretary of state Mike Pompeo demanding an explanation for the change. The letter, signed by more than two dozen members of Congress, denounced the decision: “Both the substance of this decision and the undiplomatic way in which it was carried out needlessly denigrate transatlantic relations.”

Whether the decision will be reversed remains unclear, but the letter is another reminder that while the EU may have few friends in the current White House, the EU-US relationship on Capitol Hill will far outlast any administration.