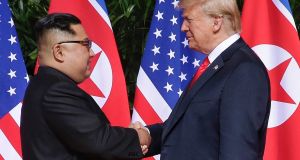 Discovery has called into question North Korea’s intentions as officials met in Sweden this week to discuss arrangements for Kim Jong-un’s second meeting with Donald Trump, which is expected to take place near the end of February. Photograph: Kevin Lim/EPA

Experts have revealed an undeclared site that reportedly serves as the headquarters of one of North Korea’s ballistic missile programmes, weeks before the country’s leader, Kim Jong-un, and Donald Trump are expected to meet to discuss denuclearisation.

The Sino-ri site, one of 20 North Korea is suspected of failing to declare, houses medium-range Nodong missiles that could be used in nuclear or conventional attacks on South Korea, Japan and the US territory of Guam, according to the report by the Center for Strategic and International Studies (CSIS) in Washington.

“The Sino-ri missile operating base and the Nodong missiles deployed at this location fit into North Korea’s presumed nuclear military strategy by providing an operational-level nuclear or conventional first-strike capability,” said the report, co-written by analyst Victor Cha.

The discovery has called into question North Korea’s intentions as officials met in Sweden this week to discuss the arrangements for Mr Kim’s second meeting with Mr Trump, which is expected to take place near the end of February, possibly in Vietnam.

The leaders have made little progress since Mr Kim signed a vaguely worded statement committing him to the denuclearisation of the Korean peninsula in exchange for security guarantees from Washington during their first summit, in Singapore last June.

The CSIS report said the base had never been declared by the North and as a result “does not appear to be the subject of denuclearisation negotiations”.

Noting that missile bases would presumably have to be part of any agreement committing North Korea to “complete, verifiable, and irreversible” denuclearisation, Cha warned: “The North Koreans are not going to negotiate over things they don’t disclose. It looks like they’re playing a game. They’re still going to have all this operational capability” even if they destroy their disclosed nuclear facilities.

Located 212km ( 132 miles) north of the demilitarised zone separating the two Koreas, the Sino-ri complex is a 18sq km (seven-square-mile) base that houses a regiment-sized unit equipped with Nodong-1 medium-range missiles, the report said.

North Korea’s Sino-ri missile site, one of 20 the regime is suspected of failing to declare.It might have also played a part in developing the Pukkuksong-2 ballistic missile that was first tested in February 2017, shortly after Mr Trump’s inauguration.

Satellite images of the base from 27th December last year show an entrance to an underground bunker, reinforced shelters and a headquarters, the report said.

Kim Joon-rak, a spokesman for South Korea’s joint chiefs of staff, said the South Korean and US militaries had been monitoring Sino-ri and other undeclared missile bases.

Sweden’s foreign ministry described talks on the forthcoming summit between representatives from North and South Korea and the US as “constructive”, adding that they had covered “developments on the Korean peninsula, including confidence building, economic development and long-term engagement”.–Guardian