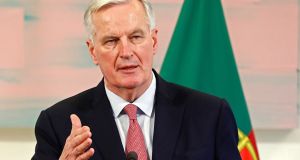 Michel Barnier repeated that if the British government abandoned some of its red lines, the EU would not be found wanting. Photograph: Antonio Pedro Santos/EPA

Michel Barnier corrected his interviewer. No, he told RTÉ at the briefest of “doorsteps” in the Berlaymont EU headquarters – on the contrary, the backstop is not London’s main preoccupation.

If only the first part of that observation were true.

There was a strong element of wishful thinking in the EU chief Brexit negotiator’s comments. Brussels had hoped that, in reaching out to build a Commons majority, UK prime minister Theresa May would now appeal to the soft Brexiteers and Remainers, and abandon hope that the irredentist wing of her own party would be reconciled to her deal.

Barnier was again repeating his mantra that if the British government was willing to abandon some of its own red lines – notably on customs union membership and membership of the single market – the EU would not be found wanting.

Tánaiste Simon Coveney was also on message. In his conversation here on Monday morning with Barnier, he said, the latter made clear “the willingness of the EU to be flexible in the context of the future relationship declaration. If the UK wants to change its red lines or approach, I think they would get a generous approach.”

In that direction, Brussels is convinced, lies the only opportunity to build a Commons majority for anything.

On the other hand, repeated ad nauseam, Brussels does not see any prospect of reopening the withdrawal agreement text, and specifically its backstop provisions. Despite UK minister for trade Liam Fox’s contention over the weekend that a new way could be found of doing the backstop, Barnier insisted the backstop was “the best deal possible”.

And while some British observers in Brussels cling to the idea that eventually our fellow member states will become disenchanted with Irish “obduracy”, there is no evidence here that any of them wants to call into question the backstop.

The only chink that appeared in the EU defences was a suggestion by the Polish foreign minister that a five-year time limit could be set to the backstop to meet Conservative and unionist concerns that it would become a permanent fixture.

No way, Coveney told journalists – a time limit was incompatible with an insurance policy. And Barnier wasn’t having any of it either. The 27 are absolutely united, he told Coveney.

The Tánaiste also said he was very pleased to receive a reassurance from the British government, that, contrary to press reports, it had no desire to renegotiate the Belfast Agreement.