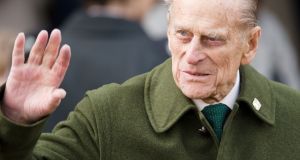 Queen Elizabeth’s husband, Prince Philip, the Duke of Edinburgh, was involved in a traffic accident while driving on Thursday near the Sandringham estate, Buckingham Palace said.

“The Duke of Edinburgh was involved in a road traffic accident with another vehicle this afternoon,” said the palace’s statement.

“The Duke was not injured. The accident took place close to the Sandringham Estate.”

The BBC reported that Philip was driving a Range Rover and that the vehicle landed on its side after a collision.

It quoted a witness as saying the Duke was very shaken.

A palace spokeswoman later confirmed the Duke was at the wheel and that he was checked by a doctor afterwards.

He did not go to hospital and was now back at Sandringham.

The former naval officer did not accompany the Queen to a church service on Christmas Day last month, though a royal source said he was in good health.