France and Germany to sign new treaty on co-operation 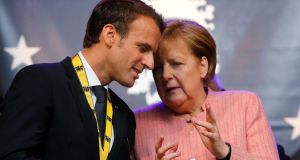 French president Emmanuel Macron and German chancellor Angela Merkel will meet on Tuesday morning in the coronation room of the town hall in the German city of Aachen to sign a new “Treaty of Franco-German Co-operation and Integration”, 56 years after Charles de Gaulle and Konrad Adenauer signed the Treaty of the Élysée, which is the cornerstone of reconciliation between the two countries.

The new treaty will “complement, not replace” the previous treaty, an adviser to Macron stressed, calling it the “treaty of convergence”.

The 28-article, 13-page text is a bland commitment to relaunch a raft of Franco-German projects. Brexit and the spread of populist nationalism across the continent have created “an objectively difficult context” in the EU, the presidential adviser said. In the run-up to European parliamentary elections, “It is all the more important to have a Franco-German couple that is on the offensive, efficient, engaged and co-ordinated,” he added.

Paris and Berlin already co-ordinate their positions before every EU summit.  As noted in the treaty, “The two countries consult one another regularly at every level before important European events.”

France and Germany recently launched programmes to build tanks and aircraft together. The treaty notes vaguely that they will “elaborate a shared approach to arms exports”.

A mutual defence clause requires the two countries “to assist each other by all means at their disposal, including armed force, in the event of armed aggression against one of their territories”.

That commitment already exists under article 42, paragraph seven, of the Treaty on European Union, and in article five of the North Atlantic Treaty. These texts “inspired each other”, the adviser said. “They mean there are concentric circles, of German and French proximity, within the EU and then Nato. ”

The twinning of French and German schools and towns is to be relaunched. The treaty provides legal means to harmonise social charges, taxation and rules on either side of the border. More than 50,000 French people cross the border to work in Germany each day.

The text aspires to a “Franco-German economic zone” and establishes a joint council of economic experts which will try to bring opposing economic visions closer together. “In France, we insist on a budget for the euro zone, on stimulus,” the adviser said, whereas the German Council of Economic Experts “often reproaches the German government for overspending”.

French and German television networks have begun work on a “Franco-German digital information platform”. And the two countries will co-operate in dismantling the French nuclear power plant on the border at Fessenheim.

Macron has been weakened by the gilets jaunes revolt, and Merkel will leave office in the autumn of 2021 at the latest. Under their rule, France and Germany have not been able to agree on a budget for the euro zone or the taxation of internet giants, both major goals for Macron. Critics say the new treaty lacks ambition because it does not address the euro zone, the integration of migrants or social and environmental policy.

The French believe they may find it easier to work with Annegret Kramp-Karrenbauer, who has replaced Merkel at the head of the CDU. “AKK” is from the Rhineland border region and is fluent in French.

Despite its banality, the treaty became the subject of conspiracy theories on the far right and among gilets jaunes protesters. In repeated television appearances and on her Twitter feed, Marine Le Pen, the leader of the Rassemblement National, has accused Macron of “betraying the French nation” by “signing the treaty of Aachen in secret”, “selling off pieces of our country” and “intending to share our seat on the [UN] Security Council with Germany”.

The German vice-chancellor and finance minister Olaf Scholz suggested last November that France might “transform [its security council seat] into the seat of the European Union”. It would be possible for the actual representative to always be French, Scholz said. France refused.

Article five of the new treaty foresees “exchanges” between the French representative on the security council and the German ambassador, who holds a temporary seat for two years. Article eight expresses French support for Germany’s quest to obtain a permanent seat on the council. Germany has long sought such a seat. So have Brazil, India and Japan.