Brigitte Macron’s first formal interview is a labour of love

In an ‘Elle’ magazine spread, France’s first lady expounds on her unusual marriage 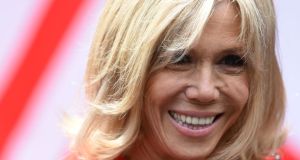 Brigitte Macron: ‘We have breakfast together, me with my wrinkles, him with his freshness.’ Photograph: Filippo Monteforte/AFP/Getty Images

It’s too early to conjecture what President Emmanuel Macron’s legacy will be, but his long love affair with his wife, Brigitte, who is 24 years and eight months his senior, will go down in history as a legendary romance. It is already the stuff of countless dinner conversations. A Hollywood film cannot be far off.

Brigitte Macron has until now been a discreet presence, though most French women seem able to recount every outfit – and every designer – she has worn since her husband’s election. Elle magazine put Ms Macron on the cover of its current issue and devoted a 10-page spread to her first interview as first lady.

A spokesperson for the magazine said sales “have taken off”, although figures will not be available until week’s end. Ms Macron was not given the questions in advance, but she was allowed to “validate” quotations and photographs.

In several photos the first lady wears tight, worn jeans with stiletto heels. All her outfits are in the French colours of blue, white and/or red. Her dresses seem to have innumerable zips.

Ms Macron addressed the controversy earlier this month over the president’s promise to define her role. “It’s very clear in my mind. The French elected Emmanuel. They didn’t elect me, although of course they knew we were a couple.”

Ms Macron says she gives her husband advice. “He does what he wants with it. What I want more than all else is not to harm him. That is my obsession. If one day I sense that my presence is complicating his presidency, I’ll make myself scarce. Obviously I will still be with him, but in the background.”

The Élysée on Monday published the promised “charter of transparency” defining Ms Macron’s status. The 1½-page document refers to her by the gender-neutral term “spouse” and makes it clear that “by virtue of republican tradition and diplomatic practice” it is establishing a precedent for future presidential partners.

The accompanying official statement stresses the “unprecedented” nature of the charter, which seems to have more to do with the French obsession for committing everything to paper than with shaking up tradition.

At 64, Ms Macron is already two years beyond France’s official retirement age. She will, the text says, “supervise official events and receptions at the Élysée Palace” and “support . . . charitable, cultural or social events”.

She has also been asked to promote “initiatives . . . that enable French society to be more inclusive of difference”. She will have no expense account and no budget.

Asked if she fears being relegated to the role of super housewife, Ms Macron told Elle: “The man who could lock me up hasn’t been born!” She goes outside the palace daily. “With a cap, headphones and sunglasses, you can go anywhere! I took the metro until very recently. As long as people don’t see my hair, I’m fine.”

Emmanuel Macron was a 15-year-old lycée student and Brigitte was a married 39-year-old French teacher when they met in Amiens. They joke that “The only thing wrong with Emmanuel is being younger”. She corrects a widespread misconception: “Emmanuel was never in my class. The idiot who says I read his poems and homework is lying.”

They had “a relationship of artistic equals”, working on a play for the school drama club. “We wrote together every Friday evening, and from Saturday, I was waiting for the following Friday. I didn’t understand why. It seemed so crazy to me.”

Ms Macron attempted to resist, encouraging her future husband to move to Paris for his last year of lycée. “This story happened slowly. I made my family understand progressively. He made his family understand progressively . . . I know I hurt my children, and that’s what I reproach myself most for. But I couldn’t not do it. There are times in your life when you make vital choices. This was one for me.”

Once a French teacher, always a French teacher. Ms Macron speaks with passion of the writers Gustave Flaubert, Arthur Rimbaud and Charles Baudelaire, whose Flowers of Evil sits on her bedside table.

She has read three novels by the French president. “Babylone, Babylone is remarkable. Emmanuel is fascinated by Mexico. He knows the country without having been there . . . I am amazed by his intellectual capacities. He is extraordinary. I am talking about the man, not about my husband.”

The Macrons were not able to live together until 2007, the year they married. They don’t like being separated, even for a night, Ms Macron says. He never “disconnects”. She realises what physical form the office requires.

“Of course, we have breakfast together, me with my wrinkles, him with his freshness, but that’s the way it is. If I hadn’t made this choice, I would have missed out on my life.”