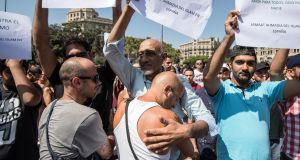 Few countries in western Europe have suffered the sharp end of terror as much as Spain.

The Basque Eta group murdered more than 800 people in a campaign of violence that finally came to an end only in 2011.

Its last major attack, the bombing of Madrid Barajas airport, took place in 2006. Jihadist terror, too, left its mark on the nation, when al-Qaeda operatives blew up four commuter trains as they pulled into Madrid’s Atocha train station in March 2004. The attack claimed 192 lives – the deadliest on European soil since the Lockerbie plane bombing in 1988.

Over the past decade, however, the country was largely spared from terrorist atrocities – a rare period of tranquillity that has now come to a brutal end. Spaniards had watched from afar as attackers targeted London, Paris, Brussels, Nice and Berlin, all the while hoping that their own cities would remain safe.

On Thursday, as a white van cut its bloody swath through locals and tourists on Las Ramblas, the country’s luck finally ran out.

The choice of target came as little surprise to experts on the country’s jihadist community. Barcelona and the surrounding province have long been identified as the principal hub of Salafist-Jihadist recruitment and activity in Spain.

According to data compiled by the Real Instituto Elcano, a Madrid-based thinktank, close to a quarter of all Spanish suspects arrested in connection with radical jihadism between 2013 and 2016 were from the Catalan capital and surrounding areas.

The concentration is explained largely by the presence of an established migrant community, said Carola García-Calvo, senior analyst on international terrorism at the Elcano.

“We know that the segment of the population that is most affected by jihadism is the second or third generation of migrants from majority Muslim countries,” she said. “This has to do in part with a crisis of identity: they don’t feel French or Spanish but neither do they feel close to the country of their parents and grandparents. In that situation, the jihadist message can be very powerful.”

She added: “Spain on the whole does not have many second-generation immigrants. But Barcelona is one area where migration has traditionally been very strong, especially from north Africa. There you do have a second generation.”

Manuel Torres, an expert on jihadism at the Pablo Olavide University in Seville, said Catalonia also stands out as the only centre of the Salafist movement in Spain.

“There are mosques and centres where there is a discourse of self-segregation and a rejection of the values and legal order that exist in this country,” he said.

Initial assessments on Thursday pointed to a typical “low-cost” attack committed by an individual assailant using a readily available weapon – a rental van. That picture changed over the course of Friday, however, as police confirmed that the Barcelona attack was part of a much more ambitious plan, and the driver part of a larger cell.

The attack is likely to raise questions, not least over Spain’s idiosyncratic approach towards fighting jihadi radicalisation and terror.

In recent years, Madrid has developed a strategy that offers a clear contrast to that employed by countries such as France, Britain, Germany or Belgium. In the wake of changes to Spain’s anti-terrorism laws in 2010 and 2015, the country’s police and intelligence services have tried to intervene at the earliest possible moment – arresting suspects long before a possible terrorist plot reaches fruition.

This means jihadi suspects are often convicted for lesser crimes, such as sharing terrorist propaganda online, instead of serving long sentences for plotting a terrorist attack. From the point of view of Spanish authorities, “it’s better to have them serve relatively low sentences than to have them out on the street”, said Torres.

The approach, he added, reflected the experience of the 2004 Atocha bombing. Spanish police and intelligence identified some of the perpetrators as potential attackers before the event, but held out for more solid proof of a plot. “That changed the paradigm. The authorities decided that this must not happen again. We cannot leave people out on the street and mobilised,” said Torres.

Countries such as the UK, in contrast, still tend to wait and observe a terrorist cell for much longer, in the hope of learning more about contacts and ringleaders – and of building cast-iron evidence for a future trial.

That focus explains why Spain has made a relatively large number of arrests despite having only a small pool of suspects. Only 214 known jihadis have left Spain to join the ranks of Isis in Syria and Iraq in recent years, compared with an estimated 2,000 from France and about 1,000 each from Germany and Britain.

In terms of detentions, however, only France and the UK recorded more arrests than Spain last year. According to data from Europol, Spain accounted for one in 10 jihadist arrests in Europe last year – significantly more than Germany, Italy or Belgium.

But experts such as García-Calvo and Torres point out that no anti-terror strategy can provide complete insulation from the risk of attack.

“We always knew that Spain was a target and that what happened in France, the UK and Germany could also happen here,” Torres said. “We were lucky until now.”