Steve Bannon’s out, but his agenda may not be

Analysis: Trump’s chief strategist had a say on trade, climate change and immigration 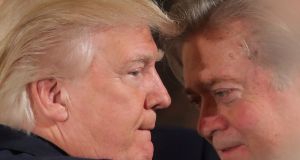 In his West Wing office, Stephen Bannon kept a chart listing trade actions – on China, steel and cars– that the Trump White House planned to roll out, week by week, through autumn.

Now that Bannon, the president’s chief strategist, has been pushed out, the question is whether his agenda will be erased along with him.

It is not just trade: Bannon has had a strong voice on issues from climate change and China to immigration and the war in Afghanistan.

He has been an unyielding advocate for a visceral brand of nationalism, and though he lost as often as he won in policy debates, his departure could tip the balance on some fiercely contested issues toward a more mainstream approach, even if the core tenets of his philosophy survive.

Bannon’s dorm-like office functioned as a sort of command centre for the administration’s nationalist wing.

He met there with a coterie of mostly young, like-minded colleagues, planning strategy and plotting against foes, from Lt Gen HR McMaster, the national security adviser, to Gary Cohn, the director of the National Economic Council.

He will no longer have access to briefing papers or sit in meetings, like a regular Tuesday morning session in the Roosevelt Room where he sparred with Cohn and other officials over the timing of trade moves against China.

Still, there are reasons to believe Bannon’s core worldview will outlast him. On Friday, the United States announced it would open an investigation into China’s alleged theft of technology from US companies.

I want to thank Steve Bannon for his service. He came to the campaign during my run against Crooked Hillary Clinton - it was great! Thanks S

On immigration, Trump listens to another adviser, Stephen Miller, who pushed the administration’s travel ban on Muslims. Miller has strengthened his position in the West Wing, in part by building a rapport over 18 months with Trump’s son-in-law, Jared Kushner.

New chief of staff, John Kelly, a retired Marine Corps general, has moved to tighten discipline and access to the president.

Kelly, officials said, has particular disdain for people sounding off on sensitive national security issues without background or expertise, as Bannon did when he told a liberal publication, The American Prospect, that the United States had no military option against North Korea.

Although he was saying what virtually every military commander believes – that a military attack on the North would prompt a catastrophic reprisal on the South – his comments contradicted Trump’s bellicose warning to the North Korean leader, Kim Jong Un, that he would rain “fire and fury” down on him.

Bannon’s departure helps those in the administration who favour a more interventionist military approach, whether on Syria, where Bannon opposed Trump’s missile strike on president Bashar Assad, or on Afghanistan.

On Friday, Trump met his national security team at Camp David, and has all but decided on a more conventional plan that would keep nearly 4,000 US troops in the country.

But, prompted in part by Bannon’s persistent questioning, the United States will place more demands on the Afghan government, according to officials.

With Bannon out of the picture, McMaster will have less internal resistance to his proposals for Afghanistan.

But Trump himself has expressed deep scepticism about an open-ended US military commitment in that country. And Bannon is likely to turn up the pressure on McMaster from his perch at his old employer, Breitbart News, where he is again the executive chairman.

Bannon plans to use Breitbart to champion all the themes he pushed while in government. He also anticipates he will continue talking to Trump, whom friends say often prizes advice he gets from outsiders or on cable news shows more than the guidance he gets from his staff. Bannon and Trump had an easy chemistry until the relationship frayed.

In his eight months in government, Bannon said, he got a crash course in how the bureaucracy functions, which he will use to advance his positions on trade, taxes and China.

“He will temporarily be more dangerous on the outside, but he still won’t be able to get anything done on the inside, and that’s the problem,” said Roger Stone, an informal adviser to the president for decades, who has recently become deeply critical of Bannon.

“I don’t think Bannon can have more influence on policy from the outside, whatever he does, simply because he won’t be at the table to make the case when decisions are made,” said David Axelrod, who served as former president Barack Obama’s chief strategist and has written about his frustration over his diminished access to Obama after he left the White House in 2011.

“A lot depends on Trump,” Axelrod continued. “If Bannon and Breitbart are spinning him up, Trump may dial him up on a regular basis. That may give him leverage.”