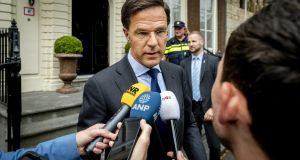 Dutch prime minister Mark Rutte is facing possibility of having to go it alone with a minority budget next month. Photograph: Remko De Waal/EPA

Still without a new government about 160 days after the March general election, the Netherlands is facing the collapse of its caretaker coalition – and the possibility that prime minister Mark Rutte’s Liberals may have to go it alone with a minority budget next month.

Coalition talks resumed this week after a brief summer recess. Ironically though, it’s not the failure to do a deal that’s threatening political meltdown – but a warning from the Liberals’ coalition partners, Labour, that they may pull the plug on the caretaker cabinet before a new one is formed.

In political terms, Labour’s position is understandable. It reflects a general fraying of nerves as the negotiations continue at a leisurely pace, all the while excluding the party that came second in the election, Geert Wilders’s right-wing Freedom Party, which took a hefty 13.1 per cent of the vote.

The talks were hamstrung from the start after Rutte vowed not to talk to Wilders because of his anti-Moroccan rhetoric, ignoring the fact that, unpalatable though it may be, his party is a natural fit with the Liberals and Christian Democrats on issues such as immigration and law and order.

So, while the latest of three “sherpas” struggles to identify unlikely common ground between the Liberals, the Christian Democrats, pro-euthanasia D66, and anti-euthanasia Christian Union, Labour is becoming restive.

As well it might. As junior coalition partners routinely are, Labour was trounced at the ballot box, plunging 29 seats to a historic low and pledging not to take part in the coalition talks, but instead to reflect on its political sins and rebuild relations with its core supporters.

Traditionally, among those core supporters are primary school teachers who staged a toe-in-the-water one-hour pay strike in June, just before the holidays, and who plan an escalating series of longer stoppages in the new school year.

Labour leader Lodewijk Asscher says he won’t sign off on a caretaker Lib-Lab budget, due on the third Tuesday of September, unless it includes a pay increase for the teachers.

The Liberals are adamant that that won’t happen, not least, they argue, because of a €500 million “black hole” in the education budget.

If Labour refuses to play ball – and after all, there’s no longer anything to be gained by “playing at government” and at least some political benefit from sticking up for “undervalued” teachers – then the Liberals will have to table an alternative budget as a minority caretaker government, unprecedented in Dutch politics.

That would leave Rutte open to a barrage of criticism for failing to form a new government, failing to hold his caretaker cabinet together, and worst of all, failing to prevent teachers from causing autumn chaos for hard-pressed working parents.

It’s extraordinary how the prospect of a minority government and budget day recrimination has focused the coalition talks.

There are suggestions now of a compromise between D66 and Christian Union on what are being termed “ethical issues” – essentially euthanasia, human embryo research, and a proposed change in the organ donor register from opt-in to opt-out – whereby there would be no new legislation on any of the three, but agreement to commission further research, certainly on the first two.

If that sounds like a good, old-fashioned, piece of political fudge that’s probably because, if it comes to pass, that’s exactly what it is.

There’s something for everyone: D66 doesn’t abandon its demands for greater liberalisation, Christian Union holds the line against societal decline, the Christian Democrats return to coalition – and Mark Rutte remains as prime minister, at the head of his fourth successive government.

Two things have given credence to the possibility that the ethical logjam may have been broken – the first being the extremely irritated response of Christian Union leader Gert-Jan Segers to the leak, and the affable silence of Rutte, who declined to comment.

The second was the follow-up “leak” that all four parties have agreed on one big, super-important thing: that the Dutch national anthem, the Wilhelmus, will become a compulsory part of the school curriculum if this new government takes office.

Even Wilders must have smiled at such blatantly jingoistic opportunism.