Barcelona attacks: ‘Sure we could be killed in Dublin tomorrow’

As passengers land in Barcelona – El Prat airport, the atmosphere is calm but tense

Dozens of people laid candles and flowers Barcelona's famous Las Ramblas boulevard to pay tribute to the 14 people who lost their lives and the many injured when a van plowed into crowds on Thursday. Video: Conor Gallagher 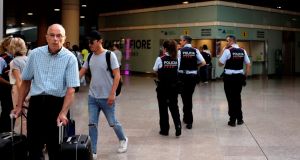 The Spanish airline’s cabin crew pleaded repeatedly for passengers not to use their phones until the aircraft’s doors opened, pleas which were largely ignored.

Even as the 3.05pm flight from Dublin made its approach into Barcelona – El Prat Airport, passengers, Irish and Spanish, were reaching for their smartphones, anxious to see if any more incidents had taken place following the terrorist attacks the previous day in the city centre and in Cambrils, 120km away.

The news headlines were largely the same as when we took off. Police were still searching for the van driver who killed 13 people on Las Ramblas. Five suspects were dead. One passenger announced to anyone who would listen that it was a female police officer who had shot dead four of the suspected attackers.

Nevertheless, many people kept their heads buried in their phones even as they went through passport control. Then the same man who had announced news of the female police officer announced there was a fire in the airport.

There was a small commotion. One mother reflexively brought her child closer to her. People looked around for airport officials who might have more information.

There was little to worry about. The fire was in a warehouse by the airport and had already been extinguished. It seemed unlikely it was related to Thursday’s attacks.

The passengers quickly relaxed, some throwing a scowl at our self-assigned news announcer. The only other complaints related to the stifling heat that greeted passengers as they entered the arrivals hall.

“We’re a bit worried I suppose but once we get through the airport I’ll be a lot happier,” Denise Taggart said as she tried to corral her three children. “Everyone was asking if we were still going to go out but, like, we’re not really going to Barcelona. We’re going down to the south, so it’s grand.”

This seemed to be the case with most Irish passengers on the flight. They were going for breaks in the areas surrounding Barcelona and were only planning to spend a day or two at most in the city itself.

“I actually didn’t know about [the attacks] until this morning,” one young woman said, slightly embarrassed. “I was working until 10 last night and didn’t see anything about it.”

“I definitely wouldn’t have changed my plans, definitely not. Sure we could be killed in Dublin tomorrow.”

Her friends laughed. They were all here to meet up with friends living in London, and were looking forward to their five-day holiday.

“It’s not a hen, [the bride] says we’re not allowed call it that. It’s a pre-wedding party,” the woman said, to more laughter.

In Barcelona’s modern, cavernous airport the atmosphere was calm and busy. There were few police to be seen and the heavily armed officers who feature so prominently in other major European airports were noticeably absent.

I want to get home to my mother. She’s very worried. She won’t leave the house

No one seemed to mind. Flights came and went mostly on time. There were no cancellations on Irish flights and airline staff said they hadn’t noticed a dramatic rise in cancellations from Dublin or last-minute bookings from Barcelona.

“Of course I came,” Mariana Navarro said, after I mistook her for an Irish tourist. “Spain is my home. I couldn’t stay in Dublin. Where would I stay? With you?” she laughed.

Mariana had been bringing her daughter to Dublin to visit the child’s father. She lives in a town 30km from Barcelona and she wept when she heard of the attacks.

“I want to get home to my mother. She’s very worried. She won’t leave the house. She’s very old.”

She shrugs when asked if she’s worried too. The police aren’t sure they’ve caught all the terrorists.