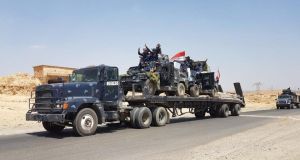 Iraqi armoured units are seen heading for the town of Tal Afar, the main remaining Islamic State stronghold in the northern part of the country. Photograph: AFP

Iraqi forces have pushed into the outskirts of one of the last Islamic State-held areas in the country – the northwestern city of Tal Afar.

The operation comes just over a month after Mosul was retaken from the terror group, ending a three-year rule over Iraq’s second city and confining the extremists to ever-shrinking pockets of the country, stretching to the Syrian border.

Up to 1,500 Islamic State members are believed to remain in Tal Afar, which has been besieged by Iraqi and Kurdish forces for much of the past year. The extremists’ ranks are thought to contain large numbers of foreign fighters, some of whom had fled the fight for Mosul. Others are thought to have spent many months digging in for the expected assault.

Battle-hardened and ideologically driven, many of the extremists seem unlikely to opt for the former, after widespread reports of executions of vanquished Islamic State fighters in Mosul.

By early afternoon, Lieut Gen Abdul-Amir Rasheed Yar Allah, who commands the operation, said the forces had recaptured a series of villages east, southwest and northwest of the city. The US-led coalition providing air and other support to the troops praised what it said was a “capable, formidable, and increasingly professional force”.

The coalition said in a statement that Iraqi forces were “well prepared to deliver another defeat” to Islamic State in Tal Afar. The United Nations said more than 30,000 people had already left Tal Afar by early Saturday.

An estimated 100,000 residents were thought to remain in the city before the operation began.

“Conditions are very tough in the city,” said the UN humanitarian co-ordinator for Iraq, Lisa Grande. “Food and water are running out, and people lack the basic necessities to survive.

“We are deeply worried about the extreme risks that families are facing. Everything has to be done by the parties to the conflict to avoid civilian casualties and ensure people have the assistance they are entitled to under international humanitarian law.”

Oxfam’s deputy country director for Iraq, Haissam Minkara, said: “Whilst most families are being taken to existing camps, thousands are also sheltering in remote villages or informal settlements in the desert where temperatures reach up to 50 degrees. People urgently need a safe place to sleep, food and clean drinking water.

“The government of Iraq must ensure that all troops involved in the offensive uphold the prime minister’s commitment to put civilian protection at the heart of their military operations and allow all civilians to reach safety and assistance without discrimination.”

Dozens of air strikes from the US-led coalition preceded the attack. A spokesperson said the strikes had targeted weapons depots and command centres. Iraqi forces claim that Islamic State members in the city are demoralised and worn out and are unlikely to put up the same resistance they did in Mosul. – (Guardian service)