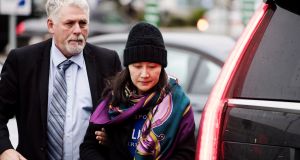 A third Canadian citizen has been detained by Chinese authorities, Canada’s ministry of global affairs said, as the high-profile arrest of a senior tech executive continues to blight relations.

A spokesperson for the ministry of global affairs confirmed that a third Canadian citizen has been detained by Chinese authorities, but did not connect the incident to the diplomatic row following the detention of Meng Wanzhou, chief financial officer of the tech giant Huawei.

Chinese state security officials are already holding a Canadian former diplomat, Michael Kovrig, who was in China researching for the International Crisis Group, and a businessman Michael Spavor.

Canada’s National Post newspaper said it was unable to confirm the identity of the detained citizen but it quoted sources saying the person was not a diplomatic official, nor an entrepreneur operating in China.

The Chinese government and state-run media have lashed out at Canada for the arrest of Ms Meng, which they say is politically motivated.

Huawei is the world’s largest supplier of telecommunications network equipment and second-biggest maker of smartphones. It is also a market leader in the development of fifth-generation (5G) mobile network technology. Ms Meng is the daughter of Huawei’s founder Ren Zhengfei.

She was detained at the request of the US, which wants to extradite her on suspicion of breaching sanction rules about exports to Iran.

The diplomatic row could impact on Canadian prime minister Justin Trudeau’s plans to launch free trade talks with the country.

Canada has beefed up security at its diplomatic outposts in China and there are growing calls within China for boycotts of Canadian goods.

The luxury clothing manufacturer Canada Goose has postponed the launch of a flagship shop in Beijing’s Sanlitun shopping district and Destination Canada, the country’s tourism marketing agency, has halted new advertisements in China as the row continues to simmer.