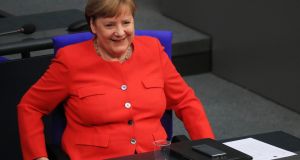 German chancellor Angela Merkel recalled how Germany’s last presidency also came around at a time of crisis in the first half of 2007. Photograph: Bloomberg

Given Germany has come through the Covid-19 crisis better than many of its neighbours, at least to date, it bodes well that the European Union patient will spend the second half of this year in treatment with Dr Angela Merkel.

On July 1st her government assumes the rotating presidency and, looking ahead on Thursday to the coming six months, Europe’s longest-serving leader demonstrated once again why she holds the title.

Merkel is no fan of hyperbole but her traditional pre-EU summit Bundestag address to MPs had an extra note of urgency.

“We are taking responsibility in a time in which the European Union is facing the greatest challenge in its history,” she said.

Aware she is facing high expectations around the continent, Merkel recalled how Germany’s last presidency also came around at a time of crisis in the first half of 2007. French and Dutch voters had just rejected the European constitution, plunging the bloc into an identity crisis.

Midway through the German presidency, Merkel invited downbeat EU leaders to mark the 50th anniversary of the Treaty of Rome, the bloc’s founding document, by signing an aspirational, non-binding “Berlin Declaration”.

The gathering at the Brandenburg Gate broke the bloc’s vicious circle of depression and paralysis and one short sentence in the declaration focused minds on what the EU is about: a continent of people who have “united, to our good fortune”.

New pandemic realities mean that uniting for any such symbolic gatherings now – in Berlin or anywhere else – will be difficult to impossible. But now more than ever, Merkel suggested on Thursday, the EU needs to resist the temptation of nationalist isolation and embrace the continent’s united, common purpose.

“The pandemic exposed how fragile the European project still is,” she added, with a nod to vulnerable supply chains and recent unco-ordinated races to close borders and secure protective equipment.

“The first reflex, including our own, were more nationalistic and not consistently European. No matter how good the reasons may have been, that was, above all, irrational.”

Gazing into her presidency crystal ball, Merkel warned that this resurgent nationalism would, if left unchecked, hijack the pandemic’s looming economic fallout.

“We cannot allow ourselves to be naive: anti-democratic forces, radical authoritarian movements, wait for economic crises to exploit them politically,” she said. When a member of the far-right Alternative für Deutschland (AfD) tried to interrupt her address at this point, Merkel remarked drily that “someone feels addressed”, and shut him up.

Even before the pandemic, the presidency was packed with work, such as the final push to agree a new seven-year budget, where the UK’s absence means higher membership contributions for cash-strapped remainers.

Some trademark Merkel pragmatism could be a welcome addition to struggling Brexit talks that Germany’s EU ambassador Michael Clauss has predicted will “absorb a lot, or most, of the political attention” of Berlin’s presidency in September and October.

The German leader is hopeful the fund – a one-off measure managed by the European Commission – can be agreed before the summer break. That would allow Berlin to negotiate with the European Parliament in the autumn while member states’ parliaments got on with their own ratification.

“This fund is urgently needed to make possible a sustainable economic recovery in all affected regions and areas in Europe,” she said. “This is the only way to secure Europe’s long-term convergence, competitiveness and solidarity.”

Finally, the German leader wants to press ahead with the twin challenges of climate protection and digitalisation.

On her watch, the German leader insisted that the Covid-19 pandemic that has claimed 100,000 European lives to date would not claim another victim in the EU.

If anything, Merkel’s address on Thursday summoned up the EU equivalent of the “blitz spirit”. Built on the ruins of war, she recalled the European Union’s knack of achieving seemingly impossible leaps forward in the most inauspicious circumstances.

Given that track record, and the current reality, the German leader struck an optimistic note that her last lap in office can help Europe do once more what it does best.