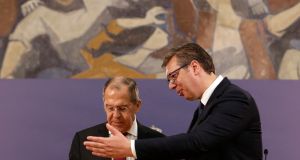 Serbia has said it needs more than the promise of eventual European Union membership to agree to recognise the independence of Kosovo, raising the question of what could be discussed when leaders of the two states meet at the White House this month.

Serbian president Aleksandar Vucic did not say what Belgrade wanted from a final deal to normalise relations with Kosovo, as he met Russian foreign minister Sergei Lavrov amid renewed efforts by major powers to resolve the longstanding dispute.

“In reply to a possible offer to recognise Kosovo and that Kosovo enters the UN, and we receive nothing in return except EU membership, our answer would be ‘no’,” Mr Vucic said on Thursday.

“Evaluations presented by our Russian friends suggest we will have to be extremely cautious and careful in monitoring any ideas that might be presented to us,” Mr Vucic added. “I want to tell our people: hard times are ahead of us, but we must be united.”

Mr Vucic and Kosovo’s president Hashim Thaci have previously suggested that some form of land swap could be the key to a deal, but both now say such a move is not being considered. Some major EU governments and Balkan experts warn that border changes could destabilise the region.

Serbia rejects its former province’s 2008 independence declaration, but the EU has told both states that they cannot join the bloc without resolving the impasse.

EU-brokered talks on the dispute broke down in acrimony in late 2018, and under a new White House envoy for the Pristina-Belgrade dialogue, Richard Grenell, the United States has taken the initiative as international mediator.

Mr Grenell announced this week that Mr Vucic and Mr Thaci will meet at the White House on June 27th, for talks that he says will focus on boosting economic ties as a platform for a political deal between Kosovo and Serbia.

Analysts believe Mr Grenell is pushing for a historic Balkan settlement that US president Donald Trump could hail as a foreign policy triumph during his re-election campaign this year.

“We believe it would be counter-productive to force a so-called final normalisation or fit it into any artificial timeframes,” Mr Lavrov said on Thursday, while reiterating that Moscow would back any deal that was acceptable to Serbia and approved by the UN security council.

Mr Lavrov also suggested that Moscow – which also rejects Kosovo’s independence – wanted the EU to continue as the main broker for Belgrade-Pristina talks.

“Russia proceeds from the fact that the European Union, which has the mandate from the UN general assembly as mediator . . . shouldn’t absolve itself of its duties,” he said.

Mr Vucic is due to meet the EU’s Balkan envoy Miroslav Lajcak next week before holding talks in Moscow with Russian president Vladimir Putin and then flying to Washington.

1 Midlands lockdown: Movement restrictions in place for residents of Kildare, Laois and Offaly
2 Main points: What restrictions have been imposed on Kildare, Offaly and Laois?
3 ‘Draconian’: TDs from across Midlands shocked and angered over lockdown
4 Masks Q&A: Who has to wear them in shops and what happens if you don’t?
5 Cambodia Bill to ban women wearing short skirts sparks outcry
Real news has value SUBSCRIBE