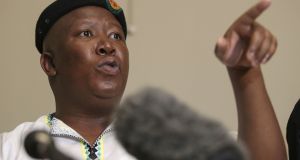 Economic Freedom Fighters party leader Julius Malema has been accused of benefiting from the looted money. He denies it. Photograph: Jordi Matas

Seven suspects accused of looting nearly €140 million from a South African bank that mainly served the rural poor have pleaded not guilty in court to dozens of corruption charges.

The men, who appeared on Thursday at Palm Ridge regional court in Johannesburg, were all arrested the day before after a 22-month investigation by the National Prosecuting Authority (NPA) into the theft of more than 2.7 billion rand (€138 million) from VBS Mutual Bank.

Mr Truter did not appear in court on Thursday as he is currently under Covid-19 quarantine. The men face 47 charges of racketeering, theft, fraud, corruption and money laundering for their alleged roles in a scam that brought the bank to its knees.

The NPA’s investigation into the bank’s activities was launched in mid-2018 after the release of a South African Reserve Bank probe into a liquidity crisis at VBS that had forced the central bank to place it under curatorship in March of that year.

The bank, which first opened for business in 1982, initially served individuals, group-savings clubs and burial societies, but between 2015 and 2018 it also started to take deposits from municipalities, which is illegal under South Africa’s banking Act.

In total, 20 municipalities pumped billions of rand into VBS meant for service delivery projects in some of the country’s poorest areas, and they had 1.2 billion rand on deposit at the institution when it went under.

The accused bank executives allegedly siphoned off large amounts of the money it had on deposit, splurging it on homes, expensive cars and luxury items like helicopters.

They are also accused of handing out large sums to individuals involved in covering up their alleged crimes, using methods like giving the beneficiaries lines of credit and mortgages from VBS that were never repaid.

The scandal is expected to have serious political ramifications, as the municipalities involved in depositing money with VBS were all under the control of the ruling African National Congress party at the time.

In addition, Economic Freedom Fighters party leader Julius Malema and his deputy, Floyd Shivambu, have been accused of benefiting from the looted money, although they have repeatedly denied the allegations.

During Thursday’s court appearance, magistrate Brian Nemavhidi granted the seven accused bail of 100,000 rand each after the NPA argued it should not be set any lower than that given the seriousness of the charges.

The NPA has also indicated it expects to make more arrests connected to the case in the near future. The forensic report it relied on to launch its investigation into VBS found that 53 people had benefited from the money looted from the bank.