US Politics: Nato’s charter claims of ‘common heritage’ reads quainter by the year 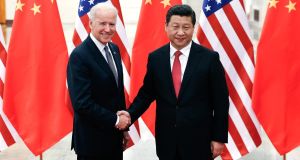 The US commitment to Europe is noble, a human-lifetime old and vastly successful. That does not stop it being slightly weird. Thirty years after the fall of the Soviets, for instance, the US continues to garrison a Germany that is not just rich but, on recent form, more internally stable than its nominal protector.

One explanation is that Russia is still a force that needs discouraging. Another is that Europe is a lily-pad for US actions in the Middle East and elsewhere. The first reason does not say why Americans, an ocean away, should form a large part of the discouragement. The trouble with the second is its open-endedness.

If the continent is strategically placed now, when will that ever stop being true? The implication is an eternal US role there. It does not take an America First-er to wonder at the warping effects on both the US and its host nations. It does not take a euro-federalist to sense that it stunts the continent’s growth into self-reliance.

In other words, the fact that Donald Trump makes a petty case against the status quo (ever the landlord, the US president says Germany is “delinquent” in its defence spending) should not blind us to the existence of a smarter one.

Nor should the Atlantic alliance count on a secure future once Trump has gone. The relationship is beset by inexorable trends, not just one disruptive president. Those who cherish it would be foolish to expect deliverance in the form of the Democratic presidential candidate Joe Biden.

The most documented of these trends is America’s turn to Asia (or, given that it shelled Sumatra a century before it stormed Normandy, its return there). Biden was an influential vice-president in the administration that began the process. In 2013, his boss Barack Obama dispatched him to shore it up. Seven years later, a candidate of such famous logorrhoea has not found much to say about Europe in his campaign. About China, he is fluent, if inconsistent.

And this is a Democrat, an establishment man, a creature of transatlantic summitry. The Asian tilt in Republican thought is yet more pronounced. True enough, 22 of the party’s congressional members wrote against Trump’s proposed drawdown of troops in Germany. But there are 197 Republicans in the House of Representatives. And even the troop issue does not capture the less-measurable ways in which Washington is now China-rapt.

The other trend that Biden will not arrest is the demographic transformation of the US itself. At 38-years-old, the median American has little memory of the cold war, let alone the world wars that formed the emotional base of the Atlantic alliance. He or she is also far likelier to be descended from Asia or Latin America than was true in 1948, when a US of overwhelmingly European ancestry founded Nato. The alliance’s charter claims “common heritage” as a basis of its unity. The line reads quainter by the year.

It won’t do, either, to cite values as what really hold this project together. In 1948, “democracy, individual liberty and rule of law”, to quote the charter again, were rare enough features to define the nations that had them. As late as the 1970s, most countries in the world were autocratic. The liberal few naturally sought safety in togetherness. Now, even after recent reversals, most countries are democracies of some shade. Others have transitioned from authoritarian to “mixed” systems at least.

Global story of my lifetime

The spread of the north Atlantic way of governance has been the global story of my lifetime. But it deprives the north Atlantic itself of its binding impetus. If its values are now diffuse, its original enemy non-existent and its “heritage” increasingly complex, it has more to worry about than Trump.

No doubt, a Biden White House would collaborate with Europe over climate change and de-escalate the trade schism. It would not undermine the EU as a heresy against the nation state.

Beyond this welcome defrosting, however, the two sides are not going to be much closer. Their relationship is reverting to its late-19th century phase, when the US and Europe had little to do with each other outside the flow of people and goods. As soothing as it is to blame Trump for the divergence, he just gives an existing process a malicious nudge.

His troop cull in Germany would cheer the West’s enemies, it is said. And so it would. But serious countries do not just identify what their enemies relish and do the opposite. To survive, the Atlantic alliance needs a deeper raison d’être than that. The election of a new US leader will not give it one. – Copyright The Financial Times Limited 2020