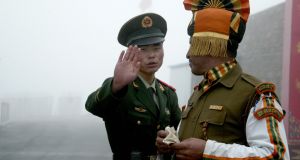 A Chinese soldier and an Indian soldier at the Nathu La border crossing in 2008. Photograph: Diptendu Dutta/AFP via Getty Images

Twenty members of India’s armed forces have died following a “violent face-off” with Chinese soldiers on India and China’s disputed Himalayan border in the worst military crisis between the two countries in nearly 60 years.

The fatalities are the first for decades in a long-running border dispute between the nuclear-armed neighbours.

The Indian army said on Tuesday that the deaths, which included a senior officer, followed a “violent face-off” in the Galwan Valley on Monday night. Chinese and Indian troops have been locked in a stand-off over disputed territory in the region since early May.

The border clash marks a sharp escalation in tensions after multiple rounds of talks by Indian and Chinese military commanders intended to de-escalate tensions.

A spokesman for the Chinese foreign ministry said the country’s troops had been “provoked and attacked” but did not confirm any fatalities. The spokesman also said Indian troops had crossed into Chinese territory.

New Delhi indicated that both sides were engaged in efforts to prevent further violence. “Senior military officials of the two sides are currently meeting at the venue to defuse the situation,” the Indian army said.

“Escalation of this is not in the interests of either China or India,” he said. “It is an event that happened in the heat of the moment and this needs to be resolved.”

However, analysts warned that the deaths of the soldiers would complicate the fraught relations between two countries that increasingly view each other as strategic rivals.

India and China fought a bitter border war in 1962 but the unresolved dispute has not claimed any lives since the 1970s. However, tensions have mounted since early May, with border patrols engaging in violent brawls, after Chinese troops established positions in areas previously patrolled by India.

The location of the latest clash is strategically significant, as it oversees a newly built Indian road that New Delhi can use to supply its most forward base.

“The risks of further military clashes cannot be discounted,” said Brahma Chellaney, a professor of strategic studies at the Centre for Policy Research, a think tank based in New Delhi.

“What has happened now is a direct result of China’s aggression. It caught India napping by stealthily encroaching on key border areas in Ladakh. Unless the [Chinese military] is willing to roll back, the border situation will remain tense and difficult.”

Hu Xijin, editor of Global Times, the nationalistic state-owned Chinese tabloid, said China had also suffered casualties in the latest clashes. “I want to tell the Indian side, don’t be arrogant and misread China’s restraint as being weak,” Mr Hu wrote on Twitter. “China doesn’t want to have a clash with India, but we don’t fear it.”

Indian and Chinese border patrols typically do not carry firearms in their disputed border zones, under mutually agreed protocols intended to prevent an inadvertent escalation of violence. Indian analysts said the latest clash involved hand-to-hand combat and improvised weapons such as nail-studded clubs.

Beijing and New Delhi had been trying to calm their fraught relationship, despite deep mutual suspicion on both sides. Last October, Chinese president Xi Jinping and Indian prime minister Narendra Modi exuded bonhomie and amicable relations at an informal summit.

But animosity between the countries has mounted over the past year, fuelled in part by US president Donald Trump’s increasing hostility towards China and strategic embrace of India.

The escalation comes at a difficult time for Mr Xi, whose administration is battling to contain a new coronavirus outbreak in Beijing and revive an economy that contracted almost 7 per cent in the first quarter.