Taking the knee is ‘from Game of Thrones’, says Raab of Black Lives Matter 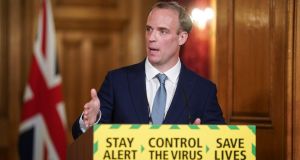 Dominic Raab: “I’d take the knee for two people: the queen and the Mrs when I asked her to marry me.” Photograph: Pippa Fowles/10 Downing Street/Crown Copyright/PA Wire

The UK foreign secretary, Dominic Raab, has said he views the symbolic Black Lives Matter action of taking the knee as “a symbol of subjugation and subordination”, and that he believes it comes from the TV programme Game of Thrones.

Mr Raab said that while he understood why some people took the knee – which in fact originates in a protest against racism and police brutality begun by US athletes, notably the American football player Colin Kaepernick – he would only do so for “the queen and the Mrs when I asked her to marry me”.

The pose, in which people pause with one knee on the ground, has become ubiquitous as a way of showing support for Black Lives Matter, and respect for those killed, such as George Floyd, who died at the hands of police in Minneapolis.

Among those in the UK who have adopted the pose are some police officers at protests, the Labour leader, Keir Starmer, and Premier League footballers and officials on Wednesday, before the first games since the pause in the season caused by coronavirus.

Speaking to Talk Radio on Thursday, Mr Raab was asked whether he would adopt the pose. He replied: “Do you know what? I understand this sense of frustration, of restlessness, which is driving the Black Lives Matter movement.

“I’ve got say, on this take the knee thing – which, I don’t know, maybe it’s got a broader history but it seems to be taken from the Game of Thrones – feels to me like a symbol of subjugation and subordination, rather than one of liberation and emancipation. But I understand people feel differently about it, so it’s a matter of personal choice.”

In a later tweet, Mr Raab added: “To be clear: I have full respect for the Black Lives Matter movement, and the issues driving them. If people wish to take a knee, that’s their choice and I respect it. We all need to come together to tackle any discrimination and social injustice.”

It is not clear why Mr Raab believed the pose came from Game of Thrones, the popular TV fantasy series.

It in fact began in 2016 when Kaepernick, then a quarterback for the San Francisco 49ers, opted to sit on the team bench rather than stand for the pre-NFL game rendition of the US national anthem, in protest against racism and police brutality.

Kaepernick, who was joined by some other players, later decided to pose on one knee, saying this made the same point while showing more respect to military veterans.

Kaepernick’s actions saw him frozen out of professional sport, amid criticism from Donald Trump and others. He could now return to the NFL, with even Mr Trump saying this would not be a problem for him.

Asked whether he would take the knee to show solidarity with Black Lives Matter, Mr Raab said he would not, adding: “I’d take the knee for two people: the queen and the Mrs when I asked her to marry me.”

On the subject of his wife he added: “By the way, she disputes that. I had this conversation with her last night. I’m sure I did, but we’d obviously had too much champagne at the time. But I’m certain I did.”

Mr Raab’s Game of Thrones theory is not the first time he has expressed unusual views. In 2018, as Brexit secretary, he prompted criticism – and some mockery – for saying that he had only recently appreciated the importance of the Dover-Calais crossing for UK trade. – Guardian

1 Coronavirus: ‘Midlands lockdown’ on the cards following surge in cases in Kildare, Laois and Offaly
2 Ireland's 'R number' of almost 2 a 'serious concern' as number of new cases jumps
3 Micheál Martin: Be wary of thinking virus can be governed, it ‘will come back to bite us’
4 Masks Q&A: Who has to wear them in shops and what happens if you don’t?
5 How a ship abandoned by its owner brought deadly cargo to Beirut
Real news has value SUBSCRIBE