Europe Letter: Germany’s goal is to keep Europe together as it assumes the EU presidency 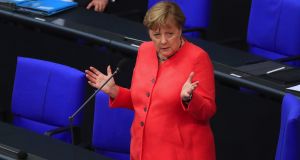 Germany has this week assumed the presidency of the Council of the European Union, and the timing could hardly be more crucial.

The role, which rotates between EU member states every six months, means chancellor Angela Merkel will be chairing meetings of the national leaders as they confront the coronavirus pandemic and its profound economic fallout.

It’s a debate that could shape the future of the union, and Merkel will be steering it in what is expected to be the final year of her time as German chancellor, a position she has held since 2005. The next six months could be the making of her European legacy, and for Berlin, nothing less than the union itself is at stake.

“The prime objective we see in our presidency, so the most important, is to keep this European Union together,” a senior German diplomat said.

This sentiment is crucial to understanding a move by Germany that almost no one saw coming.

In May, Merkel held a surprise press conference with French president Emmanuel Macron. The two leaders announced their joint support for a proposal to counter the economic damage of the pandemic. It involved a package of €500 billion in grants to the countries hit hardest. And it would be funded by borrowing by the EU’s executive, the European Commission.

Unlike the loans of the austerity years, these grants would not need to be paid back by the member states that receive them. To many economists, the kind of borrowing that would fund this – which would be jointly guaranteed by the whole bloc, unlike national debt – is a step towards fiscal integration that would help fix a structural flaw in the euro.

It was a remarkable shift for a German leader to make, breaking with years of policy that made Berlin the bloc’s most powerful bastion of fiscal conservatism.

Why did Merkel move? To defend the EU.

“This €500 billion in grants is something that you probably would not have expected the German side to do. But we did, because we are quite concerned that otherwise this corona crisis and its impact on our economy and our societies might lead to cracks in the European Union, that we would come out very differently out of this crisis,” the senior German diplomat explained. “That is why we decided to do something that we wouldn’t have done before.”

A detailed plan incorporating this Franco-German proposal has been drawn up by the commission and put to member states, who must now come to an agreement on it, as well as the bloc’s seven-year budget.

Countries have various objections, about size, tweaks, and which countries get the most generous slice. But the main opposition to the deal being done are the so-called Frugal Four of Austria, Denmark, Sweden and the Netherlands, who oppose joint debt and grants with no strings attached.

Berlin used to be on their side. Now, as the country that will make the largest single national contribution both to the budget and to the recovery fund, and as their former ally, Germany could hardly be a more powerful advocate for persuading them to compromise.

Berlin’s ambition is to achieve this by July 17th/18th, when the 27 national leaders are due to meet to discuss it.

A lesson lies in this tale for Britain.

There are many issues that Germany would rather dedicate its presidency to than Brexit. A common EU agreement on migration, a European Green Deal to transform the bloc to become carbon neutral by 2050, mass digitalisation, to name just a few.

But this month London has forced such topics on to the backburner by refusing to take its last opportunity to extend the transition period and buy more time to negotiate the post-Brexit relationship that will come into force on January 1st.

Both sides say little progress has been made so far: negotiators have repeated their positions to each other, but no one has moved.

As Merkel took questions in the German parliament on the first day of Germany’s EU presidency, she had a warning to give. “Progress in talks is, to put it cautiously, very limited,” she told the Bundestag. The EU “must be prepared... for the possibility that a deal doesn’t materialise”.

The British government should read in Merkel’s big economic shift the depth of her commitment to the EU. She set aside narrower national policy priorities when she felt it was necessary to defend the bloc.

EU negotiators have repeatedly complained that London is seeking terms that would give Britain member state privileges without the obligations, and British companies an advantage over EU firms. These are things that are simply against the EU’s interest, and that it therefore cannot grant.

Germany’s message is that it is time for London to move.

“Is it possible to get a deal? I think so,” the diplomat said. “But this also needs the UK to take a more realistic approach, or let’s say less ideological and more pragmatic. Then we can get it done.”