The EU's biggest obstacle may be the Dutch parliament 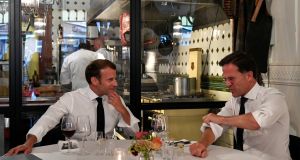 Publicity shots of the meeting showed Dutch prime minister Mark Rutte and French president Emmanuel Macron seated happily beside each other at a candlelit dining table set for two.

The pair were taking advantage of the recently reopened restaurants of The Hague on Macron’s visit to the Netherlands this week: one of the first physical meetings between leaders in the EU since the coronavirus pandemic shut down normal life.

The French leader’s mission was to try to make a dent in Dutch resistance to a recovery plan aimed at rescuing the European Union from deep economic damage caused by the pandemic. And it may take more than a friendly dinner to do so.

The rescue plan was pioneered by France and Germany, and has been a subject of debate among the EU member states since it was formally proposed by the European Commission a month ago.

It involves borrowing by the EU’s executive and distribution of funds to member states that does not need to be paid back: a generous approach to the downturn and a step towards common borrowing that some regard as a breakthrough in EU unity and a potential redress of one of the structural problems of the euro.

But the Netherlands, as the leader of the EU’s so-called “Frugal Four”, has been heading up resistance to the plan, as it opposes anything that involves increased cost to the bloc’s stronger economies or smacks of taking on responsibility for debt incurred by others.

The four, including Austria, Denmark and Sweden, have called for a “realistic level of spending” and want member states to be obliged to pay back any funds they receive.

For many years The Hague leaned on Germany to advocate tight economic policies in the bloc. But a recognition of the unprecedented nature of the current challenge, a sense that the EU needs a demonstration of solidarity to shore up unity, and an increasing belief that the time for austerity has passed has shifted attitudes in Berlin and beyond.

Not far away from where Macron and Rutte spoke stood what may be the plan’s greatest obstacle: the Dutch parliament.

The Netherlands is heading for an election due in March next year, and that makes it a difficult time to extract Dutch political compromises.

Far-right euroscepticism has long been the tail that wagged the dog of Dutch politics. For two decades anti-immigration and Brussels-bashing politicians have gnawed at the support of the centre-ground in the Netherlands, forcing natural moderates like Rutte into harder positions and mainstreaming a negative view of the bloc, despite the Dutch economy’s profound reliance on the single market.

One key element of the recovery plan – the proposal that the European Commission should be allowed to raise its own funds through taxes such as a digital or carbon levy to pay back the rescue funds – would need to be approved by national parliaments.

A Yes/No vote on an EU issue would be an ideal campaigning opportunity for right-wing anti-immigration parties such as Thierry Baudet’s Forum for Democracy, or the Freedom Party of Geert Wilders, though these days he is very much a weakened force.

Baudet was a key campaigner in driving the Netherlands’ 2016 referendum on whether to approve an EU association agreement with Ukraine, a tokenistic topic that was used as a wedge issue to mobilise the eurosceptic base and deliver a bloody nose to Rutte and Brussels with a 64 per cent rejection of the treaty on a razor-thin turnout.

The Dutch electorate is anything but uniform. It is fragmented into an array of groups from a party for the over-50s to the famous Party for the Animals, and, in the last election, the EU-friendly D66 and Greens increased their vote share, albeit while still emerging only the fourth and fifth largest parties in parliament.

Yet so potent and ingrained is a Dutch grumpiness towards the EU, alongside a British-style conviction that the bloc should remain a quid-pro-quo arrangement of economic advantage rather than a union of broader interests, that even nominally pro-EU parties sometimes temper their positions on the issue.

One of D66’s defining positions is its support for the EU. But the party joined the Dutch majority to vote against the idea of euro bonds in April after a group of nine countries including Ireland called for them.

The recovery plan, which proposes once-off borrowing by the commission to be repaid by granting the executive body the ability to raise its own money, is not the leap forward in integration that euro bonds would be. But it is a step forward, and the Dutch electorate may not allow their parliament to budge an inch.