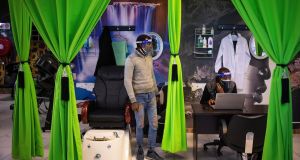 The owner and co-worker of the 1 Classie Africa beauty salon in Johannesburg, South Africa. Although hair salons are open, many like this one are struggling to get customers to visit them. Photograph: Kim Ludbrook/EPA

On Wednesday, the total confirmed death toll for the continent was at 10,167.

High profile politicians are among those who have developed Covid-19, including Ghana’s health minister Kwaku Agyeman Manu and South Sudan’s vice-president Riek Machar.

As the pandemic was spreading across the world in March, many African countries moved quickly to lock down, barring European travellers or shutting their borders completely, and implementing contract tracing and social distancing measures. At the same time, the World Health Organisation warned Africa to “prepare for the worst”. There are ongoing concerns about the capacities of health systems in many African countries, which can become quickly overwhelmed.

However, for poorer citizens across the continent, economic uncertainty and worries about getting enough food because of coronavirus-related restrictions are often more pressing than the virus itself.

The World Bank says that due Covid-19 as many as 58 million sub-Saharan Africans may fall this year into extreme poverty – something it defines as living on income of less than $1.90 (€1.69) per day. The pandemic could be the reason the region enters its first recession in 25 years, which the financial institution says could lead to “devastating consequences for household well-being”.

A new report by the Norwegian Refugee Council found that about 70,000 people in east Africa have been evicted from their homes since the pandemic began.

Hundreds of millions of children are out of school around the world, and the United Nations children’s agency, Unicef, has raised concerns about increases in child abuse, neglect and teenage pregnancies. Many Ugandans have told The Irish Times they will be in debt when the pandemic ends, and have no idea how they will pay education costs for their children when schools open up again.

In countries including Kenya, Nigeria, Uganda and South Africa, there have also been complaints about police brutality and even cases of civilians being killed while coronavirus restrictions were being enforced.