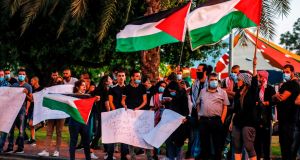 Protesters in the Arab town of Arara in the Wadi Ara region of northern Israel demonstrate against Israel’s plans to annex parts of the West Bank. Photograph: Getty

Israeli prime minister Binyamin Netanyahu has missed his self-imposed target date for annexation of occupied Palestinian territories, as France warned of “consequences” and Boris Johnson made an appeal to Israel to reconsider the move in an article in the Hebrew media.

The British prime minister, who described himself in the opinion piece as a “passionate defender of Israel”, said any annexation would be a “violation of international law”. He added that the UK would not recognise any changes to the pre-1967 borders in the West Bank that were not agreed by Israelis and Palestinians.

An Israeli cabinet minister and confidant of Mr Netanyahu, Ofir Akunis, confirmed the annexation process would not begin on Wednesday, telling Israel’s Army Radio that officials were still working out the final details with their US counterparts. He insisted, however, that he still expected the annexation to take place later in July.

Mr Akunis said co-ordination with the Trump administration could not be dismissed. In January the US advanced a plan to bring up to a third of the West Bank under direct Israeli control and leave Palestinians with limited autonomy in pockets of the remaining land.

According to sources familiar with the talks between the Trump administration and the Israelis, quoted in the Jerusalem Post, a decision on the timing and scope of annexation could take place next week.

However, even as the deadline slipped, international pressure on Israel continued to escalate, with French foreign minister Jean-Yves Le Drian telling a parliamentary committee that “an annexation decision could not be left without consequences”.

Amid a growing debate in European capitals around retaliatory measures if Israel annexes any of the occupied territories, Mr Le Drian added: “We are examining different options at a national level and also in co-ordination with our main European partners.”

The United Nations, the EU and key Arab countries have all issued similar strong messages saying annexation would violate international law and undermine the already diminished prospects of establishing a viable independent Palestinian state alongside Israel.

Mr Johnson emphasised his warm feelings for Israel, referencing the time he had spent working on a kibbutz as an 18-year-old, and he described his “sadness” in following the debate over annexation. Significantly, he made his intervention in a piece translated into Hebrew for the mass market daily Yedioth Ahronoth, Israel’s most widely read paid-for publication, rather than the left-leaning Haaretz or Jerusalem Post.

Under the plan announced by US president Donald Trump, Israel has said it intends to extend its sovereignty to Jewish settlements and the Jordan Valley in the West Bank. However, key figures in the Trump administration – the president’s son-in-law Jared Kushner key among them – have reportedly cooled on any unilateral moves by Israel.

Palestinians, who have rejected the Trump proposal, want to establish a state in the West Bank and Gaza Strip, with East Jerusalem as its capital. Israel captured those areas in a 1967 war and withdrew soldiers and settlers from Gaza in 2005. – Guardian