US president Donald Trump told the mayor of Seattle to "take back control" of the city after a protesters blocked off roads and took control of a section of the city. Video: Reuters/ As Credited 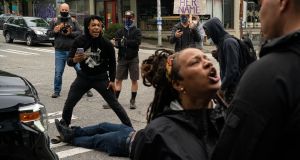 A 16-year-old is dead and a 14-year-old is in critical condition in the latest of a series of shootings inside Seattle’s self-proclaimed police-free zone, known as the Capitol Hill Organized Protest (Chop).

Initially home to hundreds of peaceful protesters, in the last 10 days, four other people were shot in the area, including a 19-year-old man who was killed. The violence has left some officials seriously questioning the safety of the encampment and looking to take steps to dismantle it.

Officers said in a police blog that at about 3am on Monday, a white Jeep Cherokee SUV was reported near a Chop concrete barrier that surrounds the protest area. Several unidentified people then fired shots into the vehicle.

“Two injured individuals, presumably the occupants of the Jeep”, were then taken to Harborview Medical Center, according to the police blog. One was transported by a private vehicle, while the other was taken by medics. Police are investigating the shooting.

Chop, originally named the Capitol Hill Autonomous Zone, or “Chaz”, was founded about three weeks ago after a series of dangerous clashes between protesters and law enforcement during protests against police brutality sparked by the killing of George Floyd. The clashes culminated in police abandoning their precinct building in the area.

Peaceful protesters filled the area with free food and community gardens, and held speeches, movie nights and teach-ins. Across the main road in the encampment, some people painted “Black Lives Matter” in large, colourful letters.

But recently, with the barrage of night-time gun violence, the numbers of demonstrators have dwindled dramatically.

During a press conference at the occupied zone on Monday, Carmen Best, the police chief, said the situation at Chop was “not safe for anybody” and said protesters should move out of the area.

“As an African-American woman with uncles and brothers, I wouldn’t want them to be in this area,” she said.

But Ms Best did not provide additional details about when officials would begin dismantling the zone.

“I can’t telegraph what’s going to happen,” she said. “I can tell you that I think enough is enough, I absolutely do.”

Jenny Durkan, Seattle’s mayor, had previously said during a meeting with protesters on Friday that the concrete barricades surrounding the protest zone would be removed on Sunday, and those directly outside the police’s east precinct would be left, according to Converge Media, the only news organisation allowed in the meeting. But no crews arrived on Sunday to remove them, and as of 3pm on Monday, the barricades were still up.

A large group of Seattle department of transportation crews had tried to remove the barriers early on Friday morning, but were stopped by several people sitting or lying on the ground in front of the equipment.

In recent days, some people in the zone have moved their tents away from Cal Anderson Park, so they are closer to the police precinct. But many still remain in the park. Questions remain about how protesters will respond to the city attempting to remove barricades, and what will happen to those still in the park.

Hours after the shooting, an African-American woman was reportedly pushed by the Fox News reporter Dan Springer, according to Derrick Drungo, an activist who witnessed the incident.

Mr Drungo said Springer then got in his truck and protesters surrounded it, asking for an apology. One woman briefly climbed on top of the truck. Activists said the reporter’s personal security detail came out and tried to pepper spray them, and the group moved a concrete barrier in front of the truck to stop him from leaving.

The reporter later got out of the car and another man with Fox tried to move the truck. While driving very slowly, Mr Drungo said the man hit him.

“I got back in front of the car and the driver kept driving,” Mr Drungo told the Guardian.

“My hands were up in the air, and he hit me six times. I told him to stop,” He added.

A spokeswoman for Fox News said: “A protester confronted Fox News Channel correspondent Dan Springer and his crew after overhearing him cancel a live report due to ‘filthy language’ in the background. The protester started yelling at him and threw a cup of coffee in his face and on his jacket.

“Attempting to de-escalate the situation, the crew returned to their vehicle, which was then surrounded by protesters. Unable to drive away, the crew turned the car off and walked away from the scene.

“At no point during the situation did the Fox News crew ever physically instigate or retaliate in any way against the protesters.”

In a tweet early on Monday, US president Donald Trump said: “Seattle Looters, Agitators, Anarchists and ‘Protestors’, are now refusing to leave the ‘CHOP’ Zone. They have ZERO respect for Government, or the Mayor of Seattle or Governor of Washington State! Not good!” – Guardian