Dr Michael Ryan of the World Health Organization says that countries in western Europe should use localised measures to control Covid-19 flare ups and should seek to avoid, if possible, countrywide lockdowns. Video: CCTV 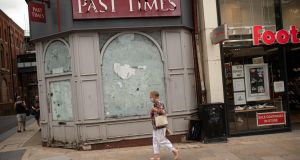 Members of the public walk through the city centre in Preston, northwest England, as local lockdown restrictions are reimposed due to a spike in cases of coronavirus in the city. Photograph: Oli Scarff/AFP via Getty Images

The number of confirmed Covid-19 infections has passed 20 million, nearly five months to the day since the World Health Organisation (WHO) declared a global pandemic.

In acknowledging the milestone, the health body’s chief warned against despair, saying that if the virus could be suppressed effectively, “we can safely open up societies”.

Global cases reached 1 million at the start of April. By May 22nd, there were 5 million cases. The figure doubled to 10 million by the end of June, and, seven weeks later, it had doubled again to 20 million.

WHO chief Tedros Adhanom Ghebreyesus said he thinks that despite the “great deal of pain and suffering” and the growing numbers, “there are green shoots of hope and . . . it’s never too late to turn the outbreak around”.

He gave examples of countries that had successfully clamped down on the spread of Covid-19, citing New Zealand and Rwanda, and praised nations that had suffered major national outbreaks and were now responding quickly to local spikes.

With much of the world caught in a cycle of outbreaks and economically crushing lockdowns, all eyes have been on the race for a vaccine. A WHO overview said 165 candidate vaccines were being worked on around the world, with six having reached Phase 3 – or large-scale human trials – of clinical evaluation.

Russian president Vladimir Putin has said a coronavirus vaccine developed in his country has been registered for use and one of his daughters has already been inoculated.

Mr Putin emphasised that the vaccine underwent the necessary tests and has proven efficient, offering a lasting immunity from coronavirus. However, scientists have been sounding the alarm that the rush to start using the vaccine before Phase 3 trials – which normally last for months and involve thousands of people – could backfire.

But the WHO’s emergencies director, Michael Ryan, warned that a vaccine was “only part of the answer”, pointing to polio and measles as diseases with vaccines that have not been fully eradicated.

“You’ve got to be able to deliver that vaccine to a population that want and demand to have that vaccine,” he said.

The global death toll now sits at more than 733,000, with the US, Brazil and Mexico recording the most fatalities. The region of Latin America and the Caribbean has the most infections, with 5.6 million cases. The region has continued to see rapid spread, with more than half a million new cases in the past week alone.

The UK on Tuesday reported 1,148 confirmed new cases of Covid-19, its highest such daily total since June 21st. The cumulative total of UK cases stood at 312,789, government data showed. It was only the second time since June that the daily total of new confirmed cases topped the 1,000 mark. The previous instance was on Sunday, when the daily figure was 1,062.

Also on Tuesday, some Scottish schools become the first in the UK to reopen as lockdown is eased. Local authorities across Scotland are taking different approaches with the timeframe for reopening schools for the first time since March 20th. Pupils in the Scottish borders were returning on Tuesday, as were some in Shetland on a phased basis.

In the US, the Trump administration was considering measures to block citizens and permanent residents from returning home if they are suspected of being infected with Covid-19.

A senior US official told Reuters that a draft regulation, which has not been finalised and could change, would give the government authorisation to block individuals who could “reasonably” be believed to have contracted Covid-19 or other diseases.

The US Centres for Disease Control and Prevention on Tuesday reported 5,064,171 total confirmed cases of the novel coronavirus in the US, an increase of 40,522 cases from its previous count, and said that the number of deaths had risen by 565 to 162,407.

In Australia there was some relatively good news on Tuesday, with the state of Victoria recording 331 new cases of the virus (down from the peak of 725 on August 5th), boosting hopes that case numbers were stabilising after a big infection surge sent the city of Melbourne into a strict six-week lockdown. There were also 19 more deaths.

Singapore’s virus-affected economy shrank almost 43 per cent in the second quarter of the year, in a sign that the country’s first recession in more than a decade was deeper than initially estimated, official data showed on Tuesday.

Tough curbs within the city state to contain the pandemic took a heavy toll on the economy, which is largely dependent on global trade and tourism.

On Tuesday, China recorded 44 new cases, but only 13 were locally transmitted – all in Xinjiang.

In New Zealand, Dr Ashley Bloomfield, the country’s beloved director general of health, took a Covid-19 nasal swab during a live news conference in order to encourage the public to accept the tests if offered.

Lebanon on Tuesday announced a record daily number of more than 300 new Covid-19 infections, and seven deaths from the virus, as the country grapples with the aftermath of the Beirut port explosion that rocked the capital and overwhelmed hospitals.

The EU’s health agency has called on states seeing an increase in cases to reinstate control measures, as it warned of a “true resurgence” or “risk of further escalation of Covid-19” in several countries.

Greece is “formally” in the midst of a second wave of the pandemic, one of the country’s top infectious disease experts said.

A total of 4,036 new Covid-19 cases were confirmed in the Netherlands in the past week, up from the 2,588 cases reported in the seven days before, the Dutch National Institute for Public Health and the Environment said on Tuesday.

The Dutch health minister plans to introduce mandatory home quarantine for people identified by local authorities as having been in close contact with somebody infected with coronavirus, and for travellers returning from high-risk countries.

In France, which has reported an average of about 1,600 new infections a day for the past seven days, compared with roughly 4,300 in April, president Emmanuel Macron held a virtual cabinet meeting to discuss a rapid rise in case numbers.

The French prime minister, Jean Castex, said the government would be consulting with local elected officials with the aim of expanding the number of areas across the country – currently 330 – where wearing a mask is now compulsory in the open air.

Mr Castex also said a ban on gatherings of more than 5,000 people would be extended until October 1st.

“For the past fortnight, the epidemiological situation has been deteriorating,” he said. “The number of hospitalisations and ICU admission has been increasing. Twenty-five new clusters are being identified every day. It’s worrying.” The prime minister said it was “indispensable, and within our grasp” to avoid a crippling new lockdown.

“We must be lucid, and get a grip on ourselves once again,” he said during a visit to a hospital in Montpellier. France has so far recorded just in excess of 200,000 Covid-19 cases and 30,000 deaths.

The German city of Hamburg has extended a ban on alcohol sales from outlets like kiosks and gas stations in a bid to thwart street gatherings that could fan the spread of coronavirus. The ban will run from 8pm to 6am local time this Friday and Saturday and applies to areas such as Altona in the western part of the port city, as well as the centre.

Germany recorded 1,220 new infections in the 24 hours through Tuesday morning, up from 385 on Monday and above the 1,000 mark for the third time in less than a week, according to data from Johns Hopkins University.

Germany has extended a partial travel warning for Spain to the capital of Madrid and the Basque region due to the Covid-19 pandemic, its foreign ministry said on Tuesday.

Belgium’s government has ruled out cancelling trains to the seaside after a weekend beach brawl prompted local mayors to call for limits on visitors to the coast. Local politicians across Belgium’s 65km strip of coastline called for action after police confronted dozens of young people, who had been disturbing other holidaymakers, at a beach in Blankenberge on Saturday. Some of the young people threw sand in people’s faces and used parasols as projectiles against police. Three people from Brussels appeared before a judge on Monday charged with assault and battery following the disturbance.

Cases in Belgium are rising at a slower rate than last month, with the week-on-week increase in case numbers slowing to 11 per cent compared with 58 per cent in July. Belgium had an average of 588 new cases a day in the week to August 7th.

Finland will quarantine travellers from most of the world to halt the spread of Covid-19. Just 25 countries are currently exempt from the mandatory quarantine, Krista Kiuru, minister for family affairs and social services, told reporters on Monday. Passengers who fail to comply face at most three months’ jail time or a fine and airlines will be required to disclose transit passengers to avoid attempts to circumvent the rules. The government will also allow authorities to conduct mandatory testing of passengers for Covid-19, Ms Kiuru said, adding that the new restrictions will come into force as soon as possible. – Agencies

1 Dr Tony Holohan expected to return to his post next week
2 NPHET recommends stricter household visitor limits across the State
3 How one couple’s weekend away resulted in 30 Covid-19 cases
4 Woulfe resignation would be unjust and disproportionate, Denham report concludes
5 Séamus Woulfe did ‘nothing involving impropriety’ to justify resignation, Denham report finds
Real news has value SUBSCRIBE