Dr Ronan Glynn, acting chief medical officer, said even though the number of cases was lower than on some days over the past fortnight, it was too early to tell if this was the beginning of a sustained trend downwards. Video: RTE 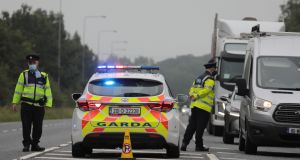 Garda checkpoint between the Meath and Kildare border near the N4 motorway at Kilcock, Co Kildare, on Monday. A spike in coronavirus cases has forced the reintroduction of local restrictions in Kildare, Laois and Offaly. Photograph: Collins Photos

Ireland and other European countries experiencing a resurgence in Covid-19 cases should consider reinstating selected restrictions to avoid further increases in cases and deaths, according to a new risk assessment by the European Centre for Disease Control.

The ECDC says there is a “true resurgence” in cases in several countries as a result of physical distancing measures being relaxed.

The assessment comes as the Government plans to roll out a national testing scheme in food processing plants with more than 50 employees.

Officials from the Department of Agriculture met the HSE on Monday to discuss the new testing regime for workers in the food companies.

A senior source said the plans will involve weekly testing in all plants in Kildare, Laois and Offaly for an initial period of four weeks.

Alongside this, testing will be directed at companies with more than 50 employees nationally although risk assessments will be carried out on smaller companies and testing may follow there too.

Officials are examining the national testing capacity and turnaround times but a source said the Government hopes to have the new serial testing scheme up and running by next week.

A spokesman for the HSE said an overall plan would be sent to the National Public Health Emergency Team (NPHET) later this week, after engagement with key stakeholders.

The ECDC risk assessment says further incidences of Covid-19 “can be mitigated if sufficient control measures are reinstalled or reinforced in a timely manner”.

Alongside a tailored and comprehensive testing strategy, the speed of contact tracing is important to reduce transmission, it says. Efforts should be made to shorten the time needed for each step in the testing, notification and contact-tracing process.

Despite the rise in cases, it says countries should be better prepared to control any resurgence given the public health measures in place.

Speaking at a NPHET briefing on Monday, acting chief medical officer Dr Ronan Glynn said Ireland is still “in a good place” relative to many places in the world, despite recent increase in case numbers. New figures from the ECDC show the incidence of the virus in Ireland rising above that in the UK for the first time on Monday.

Dr Glynn said over the past 14 days, 879 cases have been notified, giving a 14-day incidence of 18.5 per 100,000. He said Ireland’s rate was much lower than the UK’s outside counties Kildare, Laois and Offaly, where a spike in cases has forced the reintroduction of local restrictions.

Warning of “ups and downs” in the number of cases to be reported over the coming days, he said it would be next week before officials could assess whether the regional restrictions were working.

A further 57 cases were reported by the NPHET on Monday – lower than expected – and no deaths. The emergency team has brought forward its next meeting to Wednesday to focus on the evolving situation in the midlands.

Meanwhile, Tánaiste and Minister for Business Leo Varadkar is due to meet with publicans on Tuesday, and a meeting with Minister for Public Expenditure Michael McGrath is also planned. Sources say the Government is coming under increasing pressure from pubs to set a date for reopening and to provide extra financial support in the meantime.

Government TDs are also calling for an enhanced economic package to support the region. Fianna Fáil TD for Kildare North James Lawless said supports “over and above the July stimulus” were needed. He has submitted a list of potential policies to his party colleague, Minister for Public Expenditure and Reform Michael McGrath, including a waiver on licensing fees, a rebate or grant for businesses that saw stock spoiled, measures to support the hospitality sector and an extension of the local authority rates referral.

The issue of supports will be discussed at the Cabinet subcommittee on Covid-19 on Tuesday.