Trump evacuated from briefing after shooting near White House

A press briefing by US president Donald Trump was abruptly cut short by the Secret Service after a 51-year-old man was shot during a security incident on the perimeter of the White House grounds. Video: Reuters 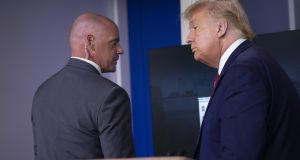 US president Donald Trump is escorted away from a news conference by a member of the secret service. Photograph: Stefani Reynolds/CNP/Bloomberg

Within minutes of Mr Trump beginning his press conference he was approached by a secret service officer and escorted out of the room and into the Oval Office. He returned to the briefing room shortly thereafter and confirmed that a suspect had been shot by the secret service on Pennsylvania Avenue.

“It was outside of the White House – somebody was taken to the hospital. It was the suspect who was shot,” he said. “I don’t know the condition of the person.”

He added that he understood the suspect was armed. “It might not have had anything to do with me,” Mr Trump added.

Outside the White House the area had a heavy police presence. Passers-by said they had witnessed a man being shot and then tended to by several secret service members.

The area immediately around the White House has witnessed widespread protests in recent months following the death of African American man George Floyd in May.

A Secret Service statement said: “At approximately 5.53pm today (Monday) a 51-year-old male approached a US Secret Service uniformed division officer who was standing at his post on the corner of 17th Street and Pennsylvania Avenue NW near the White House complex. The suspect approached the officer and told the officer he had a weapon. The suspect then turned around, ran aggressively towards the officer, and in a drawing motion, withdrew an object from his clothing. “He then crouched into a shooter’s stance as if about to fire a weapon. The Secret Service officer discharged his weapon striking the individual in the torso. Officers immediately rendered first aid to the suspect and DC Fire and EMS were called to the scene. Both the suspect and the officer were transported to local hospitals.

“The White House complex was not breached during the incident and no Secret Service protectees were ever in danger. The Secret Service office of professional responsibility will be conducting an internal review of the officer’s actions. The Metropolitan police department was contacted to conduct an investigation.”

Mr Trump said he had not been taken into the secure underground bunker but to an area near the Oval Office. He later told reporters that he did not fear for his safety. Asked if he was shaken by the incident,

MrTrump asked reporters: “I don’t know. Do I seem rattled?”

The White House is one of the most heavily fortified buildings in the country, with armed secret service agents and snipers on duty in the complex at all times. – with The Guardian