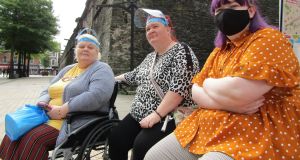 From left Catherine Lynch, Emma Ayriss and Lorrie Dawick were among those wearing r face coverings in Derry city centre on Monday.

In Derry city centre, Catherine Lynch and her daughter Emma Ayriss are taking a breather.

They are sporting plastic visors with a convenient addition - a hinge at the sides which allows them to flip them up and down as they go from inside to out.

“I’ve seen more masks out and about today than I’ve ever seen before,” says Ayriss. This is her first time wearing a face covering; her mother, who has health conditions and had been shielding, is a veteran.

“Mammy’s been wearing them from the very first day.” Lynch nods, explaining that she feels “reassured” to see everyone wearing them. “It’s just the right thing to do.”

The use of face coverings in shops and other enclosed spaces became mandatory in the North on Monday, ten days earlier than originally scheduled because of the rising number of coronavirus cases and the low numbers wearing masks on a voluntary basis.

Children under 13 and those who are unable to wear them health or disability reasons are exempt, but those who do not wear a mask without a reasonable excuse could be fined £60 (€67).

The Irish Times observed on Friday that the majority of shoppers were not wearing face coverings, whereas by Monday morning only a handful of individuals in city centre shops did not have their nose and mouth covered.

Daisy Mules also noticed the difference. She too has been wearing a face covering throughout; Monday’s reusable mask had a daisy pattern - “one of my kids sent it”.

In Donegal, she points out, “virtually everyone was wearing a mask” even before it was compulsory, whereas in a supermarket in Derry on Saturday she was one of only two people covering her face.

“I felt uncomfortable. I wanted out as soon as I could,” she explains; when she returned to the same shop on Monday, “everyone was wearing a mask.”

Outside each shop, a new routine is emerging. At the entrance to each business, customers pause and put on their masks before entering. Of the many people queuing at the post office, only one woman does not cover her face.

“I don’t want to,” she says. When The Irish Times explains that it is against the law not to wear one, she expands: “If they fine me, they fine me.”

Her companion points out that there are no signs to tell people to wear masks. “This campaign should have happened in April, when people were dying in their thousands [in the UK]. It’s 15, 16 weeks too late, telling people to wear a mask. Sure the main man himself, Boris Johnson, he never wore a mask until recently.”

Fiona Herbst noticed no such reluctance on Monday. A jewellery designer, it is her day manning the till at Number 19 Craft and Design, an artist’s collective in the city centre’s Craft Village.

“Last week, I’d put mask wearing at only about 10-20 per cent. A lot of people have been buying masks, but they weren’t wearing them,” she says. “Today’s been great, everyone’s been wearing a mask.”

At the Richmond Shopping Centre, they are well prepared, with security staff on duty at the doors asking people to wear their masks. Theirs is a light touch approach, explains marketing manager Jennifer Taylor; it is not their role to enforce, but to remind.

“We haven’t had anything negative, this morning, I think it’s just a case of understanding that people have exemptions or maybe are a wee bit afraid of them and just working with people.”

They are still feeling the impact of the coronavirus; last week footfall was down 25 per cent compared to last year, though Taylor points out that it’s a lot better than during lockdown, when it was “100 per cent down”.

“We’re very conscious of making the centre safe for our customers so that they want to come shopping again,” she explains; their hope is that masks will further encourage shoppers to return.

For those returning shoppers, there is also a new habit to learn; that of peeling off their masks on the way out. “It’s so claustrophobic,” says Sinead Reilly. “But it is compulsory, and you do feel safer wearing it.”