As infection cases mount again, especially in meat plants, testing is more vital than ever 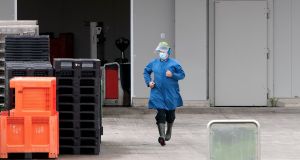 Some plants are perplexed by the speed with which outbreaks have occurred. O’Brien Fine Foods, for example, went from one case in Timahoe on July 30th to 80 cases in the space of a week. Photograph: Colin Keegan

What a difference a month makes in the world of coronavirus. A month ago, Ireland had one of the lowest incidences of the disease in Europe, while the UK was still grappling with the aftermath of its disastrous start to fighting the virus.

On July 2nd, a European Centre for Disease Control reported Ireland’s incidence as 2.9 cases per 100,000 of population over the preceding 14 days; the UK’s was 22.7, almost eight times higher.

On Monday, the tables were turned; Ireland’s incidence is now 16.9, and rising rapidly; the UK’s is 16.5, and steadier. Once again, as with our overall mortality figures, Ireland is back again in the middle of the pack when it comes to curbing the spread of Covid-19.

A month ago, Ministers were boasting about Ireland’s low figures when implementing one of the most restrictive travel policies of any European country, a go-it-alone approach that diverged from that taken by most of our EU neighbours.

They won’t be boasting now, with the graph trending steeply upwards thanks to four big outbreaks in midlands meat-processing plants and clusters occurring in most of the 26 counties. Co Kildare, with a 14-day incidence of 138 cases per 100,000 population, currently has worse figures than any single country in Europe (though Spain and Romania may have regions with higher figures).

Were we smug back then? Probably. Were we complacent? That’s probably not the case, though the change in government did not help.

Ironically, given the amount of time spent debating “green lists” and airport checks, travel has had little to do with the current spike in cases. Though our figures were low in late June, the virus was evidently still circulating, but was not being picked up by our testing and tracing system.

We had already suffered hundreds of cases in meat-processing plants in the spring, but it seemed the problem had been dealt with, and no further clusters were being reported in this sector by June.

Some of the companies seem genuinely perplexed by the speed with which outbreaks have occurred in their plants. O’Brien Fine Foods, for example, went from one case at their plant in Timahoe on July 30th to 80 cases in the space of a week.

The German research points to the need for regular and widespread testing, which appears to be happening now, finally

The fact that two of the companies currently experiencing outbreaks felt the need to bring in private companies, at their own expense, to test workers appears to indicate a level of dissatisfaction with the Health Service Executive’s ability to turn around tests quickly enough. Sources say it was done “to save a few hours”, but hours are crucial in identifying cases and ensuring their contacts go into quarantine.

Some of the companies may just have been unlucky to have experienced a clear “super-spreader” event. In Germany, the giant slaughtering plant run by Toennies suffered 1,500 cases despite the company introducing a series of preventive measures, including building its own testing centre.

That outbreak has been studied comprehensively by scientists using genetic sequencing techniques. The index case, who was masked, spread the disease to co-workers in a radius of more than eight metres over three days of work shifts, they found.

Transmission was aided by the confined area of the plant, where air was constantly recirculated and cooled to 10 degrees. Shared apartments, bedrooms or carpools did not play a major role in the initial outbreak.

The German research points to the need for regular and widespread testing, which appears to be happening now, finally. It also points to the outsized role played by certain “petri-dish” environments in driving initial transmission, which then spreads out into the community.

More generally, current events show the need for us to be actively tracking down the virus rather than finding ourselves on the back foot again and being chased by it.