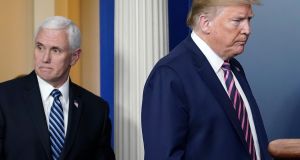 For the first time, US president Donald Trump cut off his daily coronavirus task force briefing on Friday without taking any questions from reporters.

The briefings often stretch well beyond an hour and feature combative exchanges between Mr Trump and reporters.

The president was angry after a day of punishing headlines on Friday, largely about his comment at the previous evening’s briefing wondering if it would be helpful to inject disinfectant into people to fight the coronavirus.

That idea drew loud warnings from health experts who said the idea was dangerous and sharp criticism from Democrats.

Mr Trump did answer questions from reporters earlier on Friday and claimed that his suggestion about disinfectant had been “sarcastic.”

It comes as the US death toll from the novel coronavirus reached 50,000 on Friday, having doubled in 10 days, according to a Reuters tally.

More than 875,000 Americans have contracted the highly contagious respiratory illness, also known as Covid-19, caused by the virus, and on average about 2,000 have died every day this month.

The true number of cases is thought to be higher, with state public health officials cautioning that shortages of trained workers and materials have limited testing capacity.

Deaths are also likely higher, as most states only count hospital and nursing home victims and not those who died at home. About 40 per cent of the deaths have occurred in New York state, the epicenter of the US outbreak, followed by New Jersey, Michigan and Massachusetts.

Advisers have argued that while the briefings may appeal to his most loyal base of supporters, they could be alienating some viewers, including senior citizens worried about their health.

Officials at Mr Trump’s re-election campaign have also noted a slip in his support in some battleground states and have expressed concerns that the briefings, which often contain inaccurate information, may be playing a role.

With the US coronavirus death toll topping 51,000 and nearly one in six workers out of a job, Georgia, Oklahoma and several other states took tentative steps at reopening businesses on Friday, despite disapproval from Mr Trump and medical experts.

Fitness clubs, hair salons, tattoo parlours and some other workplaces were allowed to open their doors by Georgia governor Brian Kemp, disregarding warnings from public health officials that easing restrictions too soon could lead to more infections and deaths.

Georgia, one of several states in the Deep South that waited until early April to mandate restrictions imposed weeks before across much of the rest of the country to curb the outbreak, has become a flashpoint in the debate over how and when the nation should return to work.

While the Covid-19 illness is killing thousands of Americans daily, stay-at-home orders and business closures have thrown more than 26 million people out of work, a level of unemployment not seen since the Great Depression of the 1930s.

China’s northwestern province of Shaanxi reported on Saturday seven new imported cases of the novel coronavirus, all in citizens returning home from Russia, even as domestic cases in the country were largely curbed.

China has instituted stringent checks at its ports and border points, banning the entry of foreign nationals on March 28th, and even diverting international flights from its capital city Beijing.

Still it has faced a continuous trickle of cases brought in by Chinese citizens wanting to return home in spite of risks of getting infected. In recent days, many of these have come back from Russia.

Of those, 11 were imported, compared with two the previous day.

The commission also reported 29 new asymptomatic cases, slightly down from the previous day’s 34. Four of these cases were imported.

The total number of confirmed cases in China, where the virus first emerged in late December, is now 82,816. The death toll remained the same at 4,632, with no new deaths reported on April 24th.

British prime minister Boris Johnson’s most senior aide, Dominic Cummings, took part in meetings of a scientific panel that has shaped the UK’s response to the coronavirus outbreak, the Guardian reported on Friday.

Mr Cummings is a particularly polarising figure in British politics and his involvement in the Scientific Advisory Group for Emergencies (SAGE) drew immediate criticism from opposition parties who said it undermined the group’s credibility.

Mr Johnson’s office said Cummings and another government adviser attended to improve government understanding, and that they occasionally asked questions or offered help when scientists mentioned problems within the government’s administrative machine.

Since being appointed as Johnson’s closest adviser inside Downing Street, Mr Cummings has also caused alarm among some civil servants who see him as an anti-system figure intent on disrupting the usual way of doing things.

The government has repeatedly stressed it followed scientific advice on handling the coronavirus outbreak, but faces growing criticism that its initial response was too slow.

Almost 20,000 people have died in hospital in the United Kingdom after testing positive for the new coronavirus, data showed on Friday, as Britain approached a milestone it had hoped never to reach.

Britain has the fifth-worst official death toll in the world, after the United States, Italy, Spain and France, and government scientists have said that the death rate will only start to decline quickly in another couple of weeks. – Reuters/AP