Chief Medical Officer, Dr Tony Holohan, has warned that failure to adhere to Covid-19 restrictions could see Ireland "lose a lot of the progress" that the country has made in tackling the coronavirus pandemic. Video: RTÉ 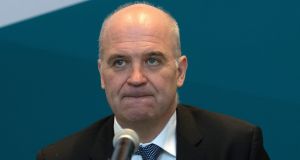 Labour Party leader Alan Kelly has written to the Department of the Taoiseach raising a series of questions about governance and transparency at the State’s public health team following a week in which similar issues were raised in the Dáil.

The National Public Health Emergency Team (NPHET) is the body of medical experts and health service chiefs which has been overseeing the response to Covid-19 and advising the Government on steps it should take to navigate through the current coronavirus pandemic. Its chairman is the State’s chief medical officer, Dr Tony Holohan.

On the surface it may seem that all is seamless with the NPHET making recommendations which are then endorsed by Ministers and put into operation by line Government departments and agencies. However, in reality, there have been tensions in this relationship which have been building since the group’s inception in January.

During a special sitting of the Dáil on Thursday, serious questions were raised about the transparency of the NPHET process and the subsequent political decision-making that has had profound effects on the lives of everyone in the country.

Mr Kelly firstly asked why no notes or minutes of the team’s meetings had been published since the end of March. “Future generations will want to know, and deserve to know, where people stood on decisions, but this is not transparent.”

“The group meets twice weekly, but there are no minutes. We cannot see how decisions are being taken. This is not acceptable,” he said, while also pointing out that there are no available minutes for the group’s 11 subcommittees. On testing, he asked if the Health Service Executive was in agreement with plans to ramp up testing to 100,000 swabs a week.

Crucially, Mr Kelly also asked if the HSE or its board had communicated in any way with the Taoiseach, the Government, the Minister for Health or the Department of Health regarding its concerns about overall governance of decision-making in this crisis.

The Irish Times understands that early this week concerns were raised at the top level in the HSE over the decision announced on Friday of last week to significantly expand testing for Covid-19.

Highly-placed sources said the chairman of the HSE, Ciarán Devane, raised concerns in representations at the highest levels in the Department of Health about the process that had led to this announcement.

A separate letter regarding the testing issue was sent by HSE chief executive Paul Reid to the department’s secretary-general, Jim Breslin.

The Irish Times asked the department about such correspondence from the HSE, and if it would publish the information.

In a statement late on Thursday, the department did not answer specifically whether it had received any correspondence from the HSE board or management.

The department said there were “ongoing communications between the department and the HSE and between senior HSE leadership and the HSE board in relation to the management of the Covid-19 outbreak, including issues being considered by NPHET”.

Weekly meetings between the Minister and the HSE board chair have also been set up, supported by department and HSE officials.

The HSE said in a statement on Friday that it “engages with the Department of Health on a regular basis and on a wide range of matters including matters relating to Covid 19 and NPHET”.

In a tweet on Friday, Minister for Health Simon Harris praised NPHET, which he said was continuing to work to keep Ireland safe.