HSE concerned at transfer of refugees during coronavirus pandemic 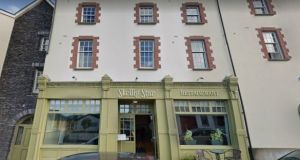 The refugees, who were sent to the former Skellig Star Hotel in Caherciveen from different locations around the country, were initially welcomed by locals. Photograph: Google Maps

The Health Service Executive raised concerns with the Department of Justice regarding the transfer of more than 100 refugees to a new direct provision centre in Kerry in the midst of the coronavirus pandemic.

The refugees, who were sent to the former Skellig Star Hotel in Caherciveen from different locations around the country, were initially welcomed by locals.

However, the mood in the Co Kerry town has turned after four cases of coronavirus, also known as Covid-19, were diagnosed, and new information has come to light about the circumstances surrounding their transfer.

In a letter to Fianna Fáil councillor Michael Cahill, the chief officer of Cork Kerry Community Healthcare ( a division of the HSE) Ger Reaney wrote that the decision to open the centre and transfer people there “at a time of pandemic was entirely a decision of the Department of Justice”.

Earlier this week, The Irish Times reported that the international protection applicants were moved from a Dublin hotel where a guest was recently confirmed as suffering from the coronavirus. The travelling party associated with the guest were self-isolating in the hotel, a branch of Travelodge near Dublin Airport, up until and after the asylum seekers were transferred. Several staff members at the hotel later were confirmed as having contracted the coronavirus.

However, none of the confirmed cases at the Skellig Star are thought to be among those who relocated from the Travelodge. Widespread testing of those in the Cahersiveen centre was undertaken earlier this week.

Cllr Cahill criticised the department for a lack of transparency around the transfer of refugees to the town. “There’s numerous questions we need them to answer at this stage,” he said. “We’re talking about a community here at the moment that are terrified, there’s outrage and anger and they’re extremely worried.”

In a statement, the department confirmed that it had relocated over 600 people as part of its response to the pandemic. The first moves took place in early March and continued up until about two weeks ago. A spokesman said the moves were deemed “not only appropriate, but an essential element of our work to protect our residents, and the staff in our centres, to the best of our ability during this pandemic”.

Meanwhile the Ombudsman, Peter Tyndall, has said that direct provision accommodation is particularly unsuitable in the context of the Covid-19 pandemic. Mr Tyndall, who on Thursday published his annual commentary on people’s experiences of the direct provision system, said the highly contagious nature of the virus highlighted “how unsustainable it is to have three or more people who are not from the same family living in the same room for a significant amount of time”.

He commended, however, the work of the department in moving people out of emergency accommodation in response to the threat from the virus.