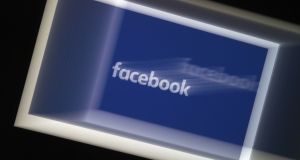 Facebook said it would begin rolling out joinable group video calls on Messenger, dubbed Messenger Rooms, that can add up to 50 people, and double the size of its group calls in WhatsApp to eight. Photograph: AFP via Getty

Facebook has begun adding new features to its video calling on Messenger, Instagram and WhatsApp as more people use the technology to keep in touch with friends and family during the pandemic restrictions.

The move comes as competing platforms such as Zoom and Houseparty have seen their popularity explode.

Facebook said it would begin rolling out joinable group video calls on Messenger, dubbed Messenger Rooms, that can add up to 50 people, and double the size of its group calls in WhatsApp to eight.

Messenger Rooms is a response to the growing demand for video services to hold fitness classes, book clubs and other group events.

Outlining the new service, Facebook’s vice president of Messenger Stan Chudnovsky said anyone could be invited to join the sessions, and did not need a Facebook account to do so. Having the Messenger app installed brings the ability to use augmented reality effects such as 360 backgrounds, mood lighting and even bunny ears.

The company said it would also allow people to create Messenger Rooms from Instagram Direct, WhatsApp and Portal.

Users can also watch and comment on live videos from their desktop.The social network is also bringing in a new feature that will allow those with a poor internet connection to listen to the audio of a Facebook Live session without the video, and public Facebook Live events will be available to those without an account.

Facebook will see the return of the “Live With” feature, which allows people to invite others to join their Facebook Live broadcasts.

Instagram will also allow people to post live streams to its IGTV service instead of posting them only as Instagram Stories, and will extend the ability to watch live broadcasts to the desktop too.

Facebook said it had seen video calling on WhatsApp and Messenger more than double in areas most affected by Covid-19, with views of Facebook Live and Instagram Live up significantly in March.