We have failed our older and more vulnerable citizens

Neglect of nursing homes during coronavirus pandemic has had disastrous results 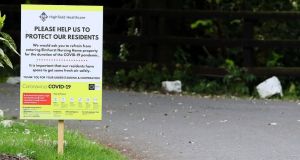 A sign in relation to Covid-19 stands at the entrance to a nursing home in Dublin. Photograph: Brian Lawless/PA Wire

The neglect of nursing homes during the coronavirus pandemic crisis has had disastrous results.

On February 28th, Nursing Homes Ireland (NHI) which represents some 80 per cent of private nursing homes, sought urgent guidance from the Health Service Executive. Alarmed at developments abroad, NHI decided, on March 6th, to limit visitors to one person, with exceptions for residents at the end of life. Four days later, the State’s chief medical officer, Dr Tony Holohan, said this was unnecessary at that stage, leading to significant flak for nursing home owners from residents’ families.

On March 17th, HSE guidance to nursing homes was still talking about “visitor notices advising of hand hygiene measures before, during and after visiting” and only mentioned “appropriate visitor restrictions in the event of an outbreak”.

On March 30th, the Health Protection Surveillance Centre issued new guidance to residential facilities saying that testing was not necessary among contacts of a confirmed case unless patients were symptomatic. Staff were advised to wear full personal protective equipment (PPE) when dealing with a suspected or confirmed case, but if they could keep one metre away, it was not necessary.

By that time many nursing homes did not have access to adequate supplies of PPE. The elderly who were not well enough for independent living found themselves at the back of the queue.

In the Irish Examiner, Tadhg Daly, chief executive of NHI, stated that he believed the decision to move older people out of acute hospitals into nursing homes may have been a factor in the surge in nursing home cases.

Also on March 30th, NHI finally got to meet Minister for Health Simon Harris after what the organisation described as weeks of chasing him. On April 4th, a support package of €72 million for nursing homes, including staff screening, priority testing and financial support, was announced.

On April 16th, the Minister told the Dáil that none of that money had been paid out but it would become operational the next day – a full six weeks after nursing-home representatives say they had alerted the Minister and the HSE to the vulnerability of the sector.

Meanwhile, an NHI survey showed that nursing homes were losing staff not only to the virus but to HSE recruitment drives. It was not until April 15th that HSE staff were allowed to voluntarily redeploy to nursing homes.

On April 18th, Dr Marcus de Brun resigned from the Medical Council, stating that “the opportunity to provide appropriate guidelines, protocols, sufficient testing, etc, was missed or ignored by [the Minister and his] department, in respect of nursing-home residents”.

Dr de Brun, a GP who cares for nursing-home residents, has watched many of them die. He believes that the people who were most vulnerable were treated as “an inconvenient afterthought”.

Between Monday and Wednesday of this week, there was a 61 per cent increase in laboratory-confirmed cases in nursing homes, an increase of 740 cases in two days. Deaths rose from 276 on Monday to 348 on Wednesday. Another 102 are likely to also have died from Covid-19.

We have failed our older and more vulnerable citizens. It is not good enough to say other countries were worse and at least no dead bodies have been found in nursing homes, as happened in Montreal and places in Spain. Those who had the power to effect change did not pay sufficient attention to the NHI when it mattered back in February. Deaths of older people have followed.

When we emerge from this crisis, we must re-evaluate how we view the elderly. Part of the reason they were neglected is that as non-economic units they were rendered invisible in society.

Not by their families, of course. Many nursing homes are very caring places, too.

However, many older people who do not need nursing-home care could live much more fulfilled and healthier lives.

The living proof, literally, is to be found in McAuley Place in Naas, Co Kildare, where 60 residents live independently in apartments at the heart of the community. There is a charity shop, tea-rooms, a community centre and, up until this pandemic, the most wonderful intergenerational contact. Transition-year students do work experience there. A network of 85 volunteers help out but residents also get stuck in. Even now, balcony entertainment from music to bingo is provided daily by volunteers. Rent is €100 a week.

After the Sisters of Mercy donated the land, a dedicated housing association board led by Margharita Solon fought for a decade to get it up and running. Originally, it was thought that many residents might eventually move on to nursing homes, but in fact, with supports such as HSE-provided home care, very few do.

If there were a McAuley Place in every town, older people would remain more visible in and connected to their communities. Then, when it came to crises such as Covid-19, they would not be so easy to forget.