‘It’s a bit of a relief’: Leaving Cert student (84) happy to delay exams 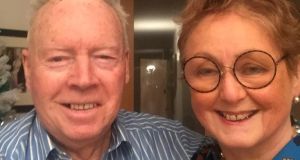 Since schools and universities closed on March 12th, studying from home has quickly become the norm for students around the country. Denise (75) and Tom (84) Griffin are no different.

The couple, who celebrated their 54th wedding anniversary on Thursday, are cocooning in their apartment in Dublin, while Mrs Griffin, whose maiden name is Farrell, studies for her final year exams of her UCD undergraduate degree and Mr Griffin studies for his Leaving Cert.

Mrs Griffin, who has two exams left in her BA in English, Latin and Art History, decided to go to college when she retired because she wanted to do more with her time, and never had the opportunity to get a degree when she was younger.

“When I got to 68 or so, I stopped working. But it didn’t suit me to have all the time on my hands. I didn’t stay well really when my head wasn’t busy,” she said.

“At about 70, I rang up UCD and Trinity and discovered that the access course you have to do before you do a degree was one year in UCD and two years in Trinity. Because I didn’t have an awful lot of years left, I decided I would do it in UCD.”

Ms Griffin said she really enjoyed the degree, during which she received two scholarships for Latin and was named a Latin scholar. “But thank God I’m finishing now,” she added with a laugh.

Her husband also recently chose to return to education. Having left school after his Inter Cert, as was common in the 1950s, he constantly revisited the idea of completing the Leaving cert.

Just before Christmas last year, he decided to register for the exams and chose to study English, Irish, maths, geography and history.

“I’m finding them okay, but a lot of the terminology is not like how I remembered. The maths now is completely different. I have to start from the beginning,” he said.

He welcomed the delay to the exams, which are now due to take place on July 29th due to the coronavirus pandemic.

“It was a bit of a relief really that it’s not too soon because it give me a chance now. I can look over the whole scenario and pick out things that are causing me difficulty and I have adequate time to do them. I probably cut myself a bit short really,” he said.

The pair have conflicting opinions on how the pandemic is affecting their education, with Mrs Griffin saying that it makes it “more difficult” and her husband saying he welcomes the lack of distractions.

“We have an apartment so we live together in the same living room, dining room. We just find that it’s not easy to withdraw and focus,” she said.

“It’s much easier,” Mr Griffin said. “There are no distractions - I can’t go out or the grandkids can’t come in, and things like that.”