Coronavirus: Rise in calls by older people having suicidal thoughts 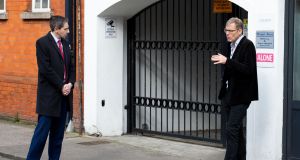 A helpline for older people has seen a “significant increase” in suicidal ideation among callers in the past 10 days, the charity behind the service has said.

Seán Moynihan, chief executive of Alone, said its national Covid-19 helpline had been receiving about “two to three calls a week from callers expressing suicidal ideation, that is now at three or four a day”.

“It is a significant increase,” he said.

The helpline has received more than 14,000 calls since it opened last month, and staff and volunteers have made some 36,000 calls to older people. About 70 per cent of calls concern people living alone and almost two-thirds involve people aged over 70.

While in the first few weeks the majority of calls were about practicalities, including how to ensure a supply of groceries and medication, Mr Moynihan said “a second phase”, around serious mental health issues, has now emerged.

“About 62 per cent of calls are [ostensibly] about practical things, but when you actually get into the call it’s really about isolation and loneliness, and loneliness has a definite relationship to depression,” he said.

“In one case last week we were lucky. We were checking in on a man who had just been – quite correctly, as he was physically well – discharged from hospital. But when we talked to him he was contemplating acting on his thoughts, shall we say. We got him back into hospital.

“There are huge levels of anxiety around the isolation which can be very disempowering. People can stop looking after themselves, and of course all the issues like housing, health, isolation haven’t gone away. They are only exacerbated during this crisis.”

All staff and volunteers on the helpline are trained social care workers and have applied suicide intervention skills training, he said. Alone is also working with Samaritans where necessary.

Among supports for older people self-isolating is a befriending scheme that operates across the State, where individuals or groups can provide company and support. It operates under the auspices of Befriending Network Ireland, and details are available from Alone on 01-6790132 or enquiries@alone.ie.