Coronavirus: Spain records no new deaths for second day in a row 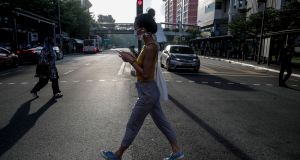 Singapore is starting to ease its Covid-19 measures, along with many other countries worldwide. Photograph: Wallace Woon/EPA

More than 6.27 million people have been reported infected with the coronavirus globally and 374,612 have died, a Reuters tally showed. Infections have been reported in more than 210 countries and territories since the first cases were identified in China last December.

In the US, there are concerns that widespread protests over the death of George Floyd could cause new outbreaks in a nation where the virus has disproportionately affected ethnic minorities.

The protests over the May 25th death of George Floyd, an unarmed African-American man killed in police custody in Minneapolis, have shaken cities from New York to Los Angeles, with many of the demonstrators not wearing masks.

New York governor Andrew Cuomo expressed concern that the protests in New York City could endanger the long, hard fight to contain the pandemic in a worldwide hot spot.

“You turn on the TV and you see these mass gatherings that could potentially be infecting hundreds and hundreds of people after everything that we have done,” Mr Cuomo said. “We have to take a minute and ask ourselves: ‘What are we doing here?”’

A new estimate by the US congressional budget office warned that the damage to the world’s largest economy could amount to nearly 16 trillion dollars (€14.4 trillion) over the next decade if congress does not work to mitigate the fallout.

Meanwhile, at least a quarter of US Covid-19 deaths were among nursing home residents, a new report said.

The report, prepared for state governors, said nearly 26,000 nursing home residents have died from the virus — a number that is only partial and likely to go higher.

Spain reported no new deaths from the coronavirus for the second day running on Tuesday, with cumulative deaths unchanged from Sunday’s total of 27,127, according to the health ministry.
Diagnosed cases of the disease rose by 137 from Monday to 239,932, the ministry said.

South American countries at the epicentre of the coronavirus pandemic are choosing to reopen even as case numbers rise, ignoring the example set by Europe nations who waited for the worst to pass.

Mike Ryan, the executive director of the World Health Organisation’s emergencies programme, said: “Clearly the situation in many South American countries is far from stable.

“There is a rapid increase in cases, and those systems are coming under increasing pressure.”

His warning came as some of Brazil’s hardest-hit cities, including the jungle metropolis Manaus and coastal Rio de Janeiro, are starting to allow more activity.

Brazil has reported more than 526,000 cases of the virus, second only to the 1.8 million reported by the US.

Elsewhere in the region, Bolivia’s government has authorised reopening most of the country, while Venezuela has unwound restrictions. Ecuador’s airports are resuming flights and shoppers are returning to some of Colombia’s malls.

New Zealand’s prime minister said on Tuesday that all remaining restrictions to limit the spread of the coronavirus may be lifted next week, after the country all but eliminated the virus domestically.

Jacinda Ardern said New Zealand could move to alert level 1 next week, which means all social distancing measures and curbs on mass gatherings will be lifted. Borders will remain closed, she said.

“Our strategy of go hard, go early has paid off . . . and in some cases, beyond expectations,” Ms Ardern said at a news conference.

The cabinet will decide on June 8th, earlier than the planned date of June 22nd, she said.

New Zealand recorded no new cases of coronavirus for a 11th consecutive day on Tuesday, and has just one active case in the country.

Thousands of New Zealanders marched on Monday decrying the death of George Floyd, an African-American man, in police custody in the US last week, despite social distancing restrictions.

Ms Ardern said she was “horrified” by Floyd’s death but noted that the protesters had flouted rules.

“I think I stand with everyone else in being horrified in what we’ve seen,” regarding Mr Floyd, Ms Ardern told state broadcaster TVNZ in an interview earlier in the day.

“I don’t want to stop peaceful protests... but rules are there to protect people,” she said, adding that she understood the sentiment of the protesters.

The Chinese city of Wuhan, where the novel coronavirus outbreak first emerged, found no new cases and 300 asymptomatic carriers after testing most of its 11 million residents, city officials said on Tuesday.

Authorities launched the ambitious, city-wide testing campaign on May 14th, and reached 9.9 million people, after a cluster of new cases raised fears of a second wave of infections.

But they found no new cases of Covid-19, the disease caused by the coronavirus in the campaign, which ran until June 1st, officials told reporters in a briefing.

They said the asymptomatic carriers had been found not to be infectious, with no traces of virus detected on items used by the 300 people, such as masks, toothbrushes and phones, or on door handles and elevator buttons they touched.

China does not count asymptomatic carriers - people who are infected with the virus but do not exhibit symptoms of the disease - as confirmed cases.

The central city, capital of Hubei province, was placed under a lockdown on Jan. 23. It was lifted on April 8th.

It was the hardest hit of any Chinese city and accounts for the majority of the 4,634 deaths and total of 83,022 infections reported in mainland China.

Japan’s government said on Tuesday it has approved saliva-based tests for the new coronavirus, offering a safer, simpler way to diagnose infection as well as boosting the number of tests being carried out using polymerase chain reaction (PCR) technology.

Currently, nasal swabs are the main source for PCR tests in Japan. Coughs and sneezes at the time of collecting samples can expose medical workers to the risk of potential infection, making it necessary for them to wear full protective gear when taking samples.

The saliva-based PCR tests can be given to those who have had symptoms for up to nine days, Japan’s health ministry said. It wasn’t immediately clear how much the change would boost overall testing capacity.

Japan falls far behind other industrialised nations in terms of the number of coronavirus tests. Critics say the low rate of testing has made it difficult to trace the virus, which has led to a series of in-hospital infection clusters.

Japan has escaped an explosive outbreak, with nearly 17,000 infections and 898 deaths so far, according to NHK public broadcaster.

Indonesia has cancelled the hajj pilgrimage this year for people in the world’s largest Muslim-majority nation due to concerns over the coronavirus, the religious affairs minister said on Tuesday.

Each year hundreds of thousands of Indonesians go on the hajj to Saudi Arabia, where Islam’s two holiest sites - Mecca and Medina - are located. For many Indonesians, the religious pilgrimage is a once-in-a lifetime event, with the average wait time 20 years due to a quota system, according to the country’s cabinet secretariat.

Saudi authorities have already said the hajj and umrah pilgrimages, which attract millions of travellers from around the world, will remain suspended until further notice.

Fachrul Razi, Indonesia’s religious affairs minister, said the decision to cancel hajj this year was made due to concerns over the coronavirus and ongoing travel restrictions.

The quota for Indonesian pilgrims this year was 221,000, with more than 90 percent already registered to go, according to the religious affairs ministry website.

The French economy is set to contract 11 per cent this year due to the coronavirus crisis and more hard days lie ahead until things bounce back next year, the country’s finance minister Bruno Le Maire said on Tuesday.

France imposed one of the Europe’s strictest lockdowns in mid-March and only began removing restrictions on May 11th. Cafes, bars and restaurants were only allowed to reopen for regular business on Tuesday.

“We were hard hit by the virus, we took effective measures to protect French people’s health but the economy practically ground to a halt for three months,” Mr Le Maire told RTL radio.

“We’re going to pay for it with growth,” he said, adding that a budget update being prepared would forecast a contraction of 11 per cent versus one of 8 per cent forecast previously.

With some 300,000 cafes, bars and restaurants reopening on Tuesday, Mr Le Maire said that they would continue to benefit from handouts from a government solidarity fund until the end of the year to help cover fixed costs.

“Even if it is hard to hear on a day when the sun is shining and the cafes are reopening, the hardest part is still ahead of us in social and economic terms,” Mr Le Maire said.

Many Singapore children returned to school on Tuesday after a novel coronavirus lockdown of nearly two months.

Across the island, staff at schools urged students to maintain a safe distance as pupils lined up to return to class.

With one of the highest coronavirus tallies in Asia, Singapore has said it will ease restrictions gradually, with the registry of marriages and some businesses, including pet salons, also reopening on Tuesday.

“You have to restart your normal life at some point,” said Harsha Yavagal, who was sending his boys aged five and 12 back to school.

“Schools are taking all possible measures to cope with the virus,” he said.

Studies in some European countries have shown reopening schools has not led to a rise in coronavirus infections, while other studies have shown fewer cases of the disease among children compared with adults.

Singapore has recorded more than 35,000 coronavirus cases and 24 deaths. Most cases have been among migrant workers living in dormitories.

The death toll rose to 5,037 after authorities said 182 people had died in the last 24 hours. -Reuters/PA