Analysis: US president invokes Christianity and ‘law and order’ amid widespread violence

US president Donald Trump has deployed soldiers on the streets of Washington DC to stop violence in the US capital and vowed to do the same in other cities if mayors and governors fail to regain control of the streets. Video: Reuters 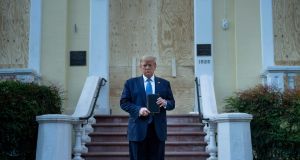 US president Donald Trump holds a Bible while visiting St John’s Church across from the White House after the area was cleared of people protesting the death of George Floyd June 1st, 2020, in Washington, DC. Photograph: Brendan Smialowski/AFP

Of all the images that may come to define the past few extraordinary days in American life, the vision of Donald Trump standing in front of St John’s Church with a bible in hand will stand out. As the streets around the White House erupted in smoke for the fourth consecutive night, shortly after 6pm officials announced that the US president would make his first public comments since Saturday in the Rose Garden.

As a former reality TV star and darling of the New York tabloid media, Trump has an eye for a story. The 6.15pm address by the president was delayed, with Trump taking to the podium at 6.45pm – 15 minutes before the Washington DC curfew was scheduled to take effect. A short distance away, protesters were demonstrating peacefully at Lafayette Square.

Suddenly, riot police began to move north firing tear gas and rubber bullets, as they sought to disperse the crowd. As Trump began to speak, the sound of flash bangs and chanting from just beyond the gates of the White House provided a dramatic backdrop to his statement.

Declaring himself the “president of law and order, and an ally of peaceful protesters”, Trump announced he would deploy the US military to end “the riots and lawlessness that has spread throughout the country”, since the death of African-American man George Floyd while in police custody. “We will end it now,” he declared. If a city or state “refuses to take the actions that are necessary” to defend the life and property of their residents, “I will deploy the United States military and quickly solve the problem for them.”

He then announced his intention to pay his respects to “a very very special place”. In a highly unusual move, Trump walked out of the gates of the White House accompanied by Secret Service and aides to St John’s Church, a small, 19th century church known as the presidents’ church. The area, which had seen destruction the previous night, had been cleared of protesters minutes before.

A fire had been started in the basement of the church during protests on Sunday night and, although extinguished, it had quickly become a focus for Fox News and conservative media as a symbol of the recklessness that was unfolding in the nation’s capital.

Irish in America: Have you observed the demonstrations?

On Monday night, Trump made that church his backdrop for a photo op, steps from the White House. Standing before the boarded-up church, pouting, he held aloft a bible in his right hand. He summoned members of his staff, including chief of staff Mark Meadows and press secretary Kayleigh McEnany, to stand beside him.

As he faced the flashing lights of the photographers, while police clashed with demonstrators a few blocks away, one reporter called out “Is that your bible?” Trump replied brusquely: “It’s a bible.”

The response captured the ludicrousness of the notion that this president was visiting the church out of religious conviction. Though Trump has spoken before about his mother’s love for the bible, he rarely attends church. The irony of a president deploying the bible as a prop for a photograph, appropriating Christianity as a re-election strategy while the capital city burns around him, was not lost on most Americans.

Chasten Buttigieg, the husband of former Democratic mayor Pete Buttigieg, a committed Christian, spoke for many when he tweeted: “The president of the United States just used tear gas and rubber bullets on peaceful protestors just so he could take a photo [opportunity] at church. This man knows nothing of God. Nothing of peace. He knows nothing and our country will continue to burn because of it.”

The Bishop of the Episcopal Diocese of Washington, Mariann Edgar Budde, could barely contain her emotion as she reacted to the unannounced visit of the president to one of the oldest churches in her diocese. “The president just used a bible, the most sacred text of the Judeo-Christian tradition, and one of the churches of my diocese without permission, as a backdrop for a message antithetical to the teachings of Jesus and everything that our churches stand for,” she said.

“The president did not pray when he came to St John’s nor did he acknowledge the agony of our country right now and in particular the people of colour.”

After he posed for photos, Trump and his entourage returned to the White House. Hours after the curfew had begun, demonstrators still walked the streets of the capital.

Mayor Muriel Bowser expressed outrage that Secret Service and the National Guard had moved protesters demonstrating peacefully before the curfew. “I imposed a curfew at 7 pm. A full 25 minutes before the curfew and without provocation, federal police used munitions on peaceful protestors in front of the White House, an act that will make the job of the DC Police Department officers more difficult,” she tweeted. “Shameful!”

Trump’s threat to invoke the 1807 insurrection Act against US citizens by announcing he would deploy the US military against what he deemed “domestic terrorists” is the latest sign that he is prepared to tear down the norms and traditions of American democracy.

By invoking Christianity and law and order as the trappings of executive power, Trump is moving America one step closer to a dictatorship at a time when the country is racked by the deepest racial and cultural divides in a generation.