TV review: The sensitive, sensual and refreshingly scandalising series draws to an end 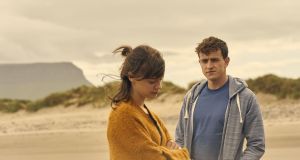 Everything has to end sometime, whether it be young love or a global lockdown. To many watching Normal People (BBC One, Monday, 9.05pm and 9.35pm) those two phenomena appeared to overlap with some fitting correspondences, where a captive (and hearteningly international) audience found themselves escaping into a much less restricted Irish coming-of-age drama, based on Sally Rooney’s novel; a must-watch programme that was sensitive, sensual and refreshingly scandalising.

Those who were most scandalised seemed also most consoled, given the nostalgic, simple pleasures of again complaining to the radio about the sight of naked flesh, rather than the advance of invisible pathogens. To others, the exquisitely cast show could be both rejuvenating and mortifying, a depiction of the intimacy and intensity of young adulthood so riven with connection and miscommunication it needed to be rationed out in careful 30-minute doses and held fast in tight close-ups and delicately muted hues.

At the series’ stately, poignant conclusion, Marianne (Daisy Edgar-Jones), settling into a finally easy-going relationship with Connell (Paul Mescal), can’t quite believe this descending calm herself. “Look at her,” she imagines her former self remark of the vastly more worldly and mature 22-year-old she has become: “She’s actually content.”

Liveline callers may twitch at the sight of full-frontal male nudity and miss the more startling fact that Connell,  who has swung between laddishness and vulnerability, is shown resting in his partner’s lap, being mothered

Well, that might be pushing it. But the finale is elegant with moments of subtle psychological insight, as though both characters had acquired enough distance to see themselves a little more clearly.

Take the fetching comfort with which Hettie Macdonald, the director of the second half of the series, has them sharing a drive, or the bathroom mirror before bed, or what might have been a freighted invitation to spend Christmas together, here resolved with the words, “So…?” And then there is a terrifically understated exchange between Sarah Greene, as Connell’s mother, Lorraine, and Daisy, who has the temerity to ask what people make of her own aloof mother. “I suppose… I suppose she’d be considered a bit odd,” says Lorraine, evenly. “Oh,” is all Marianne replies. And it feels like a breakthrough.

There’s something about the major significance within otherwise minor moments that sets Normal People apart. Liveline callers may twitch afresh, for instance, at the sight of full-frontal male nudity, and miss the more startling fact that Connell, a character who oscillated between laddish thoughtlessness and aching vulnerability, is shown resting in his partner’s lap, being mothered. When was the last time a TV drama showed you that?

That it is Connell, and not Marianne, who is going to be propelled further might strike you as strange, as he modestly accumulates publishing successes (“I’m so envious,” Marianne tells him) and is offered a place on a master of fine arts degree course in New York, while her ambitions slide out of view.

But, now separated from her family and finally, fully self-reliant, Marianne has chalked up no less remarkable or daunting an achievement. “We have done so much good for one another,” she says, as they sit quiet and tear-streaked in a college room packed up for moving on.

It’s as good an ending as you might imagine for them, and one that feels somehow appropriate for these stalled, uncertain times. Who knows what happens next? All you can do is hope we learn enough from past mistakes and emerge if not as better people then at least as normal ones.

The final two episodes of Normal People are also on RTÉ One on Tuesday at 10.15pm