US protest violence is being blamed on extremists. Who are they?

US president Donald Trump has deployed soldiers on the streets of Washington DC to stop violence in the US capital and vowed to do the same in other cities if mayors and governors fail to regain control of the streets. Video: Reuters 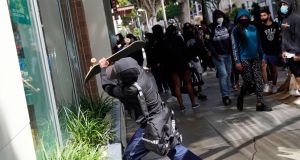 A man attempts to break the window of a store with a skateboard during widespread protests in Santa Monica, California on Sunday. Photograph: Warrick Page/Getty Images

Amid the rush to assign blame for the widespread violence and vandalism breaking out in American cities, accusations that extremists or other outside agitators were behind the destruction continue to ricochet online and on the airwaves.

Numerous political leaders, starting with President Donald Trump, have levelled accusations at various groups, asserting that some radical agenda is at play in transforming once peaceful protests over the death of a black man, George Floyd, in Minneapolis police custody.

“We have reason to believe that bad actors continue to infiltrate the rightful protests of George Floyd’s murder, which is why we are extending the curfew by one day,” governor Tim Walz of Minnesota tweeted on Sunday, after previously suggesting that white supremacists or people from outside the state fomented the unrest.

None of those pointing the finger presented much evidence to support the accusations, however, and some officials conceded the lack of solid information behind such claims.

“The truth is, nobody really knows,” Keith Ellison, Minnesota’s attorney general and a former Democratic congressman from Minneapolis, said on NBC’s Meet the Press.

“There’s been a lot of videotape taken by demonstrators of people who are very suspicious, who really did start breaking windows,” Ellison said. “There have been other photographs of cars with no licence plates. Very suspicious behaviour.”

It would all have to be investigated, he said. People associated with both the extreme right and left are being accused of igniting the conflagration. The Trump administration blamed what it called the radical left, naming Antifa, a contraction of the word “anti-fascist” that has come to be associated with a diffuse movement of left-wing protesters who engage in more aggressive techniques like vandalism.

Others said white supremacists and far-right groups were responsible, pointing to online statements by adherents that the upheaval would hasten the collapse of a multiethnic, multicultural United States.

Even if Antifa were a real organisation, the laws that permit the federal government to deem entities terrorists and impose sanctions on them are limited to foreign groups

“The United States of America will be designating ANTIFA as a Terrorist Organization,” Trump wrote on Twitter on Sunday, although it was unclear on what legal authority he could make that call.

The United States of America will be designating ANTIFA as a Terrorist Organization.

The president has periodically criticised Antifa, but it was not clear that Trump’s declaration would have any real meaning beyond his characteristic attempts to stir up culture war controversy, attract attention and please his base. Antifa is not an organisation, and it does not have a leader, membership roles or any defined, centralised structure.

It is a vaguely defined movement of people who share common protest tactics and targets. More important, even if Antifa were a real organisation, the laws that permit the federal government to deem entities terrorists and impose sanctions on them are limited to foreign groups. There is no domestic terrorism law despite periodic proposals to create one.

“There is no authority under law to do that – and if such a statute were passed, it would face serious First Amendment challenges,” said Mary B McCord, a former head of the justice department’s national security division.

When the FBI has investigated neo-Nazi organisations like the Base and Atomwaffen Division, it has treated them as criminal enterprises. Nevertheless, in a statement after Trump’s tweet, attorney general William Barr said the FBI would ally with state and local police to identify violent protesters, whom he also called domestic terrorists.

“Groups of outside radicals and agitators are exploiting the situation to pursue their own separate, violent and extremist agenda,” Barr said. “The violence instigated and carried out by Antifa and other similar groups in connection with the rioting is domestic terrorism and will be treated accordingly.”

Antifa-style protesters are hostile to law enforcement and are oriented toward street action, said Jonathan Greenblatt, the chief executive of the Anti-Defamation League, so these demonstrations provide an opportunity even if their goals are not the same as those of the original protesters. Still, he cautioned that in such a complex stew, not all the vandalism can be attributed to any one faction.

“While we have seen tactics they embrace at times during these protests, it is also unclear how many of the individuals committing violence or destroying property are Antifa or just upset with the ongoing issue of police brutality,” he said.

Members of hate groups or far-right organisations filmed themselves, sometimes heavily armed or waving extremist symbols, at demonstrations in at least 20 cities

Analysts noted a range of participants. “We’re going to see a diversity of fringe malefactors,” said Brian Levin, the director of the Center for the Study of Hate and Extremism at California State University, San Bernardino. “We know for a fact there have been far-right agitators both online and at these rallies, as well as far-left.”

Far-right adherents generated an avalanche of posts on social media in recent days suggesting the unrest was a sign that the collapse of the American system they have long awaited was at hand. These groups, known as “accelerationists”, attempt to promote any circumstances that might speed that goal.

Last month they were pushing the idea that the coronavirus pandemic and the demonstrations against shutting down public life might be their moment to incite discord. The groups are not monolithic. There are factions that express solidarity with some in the African American community in their animosity toward the police, a position dating to violent showdowns in the 1990s between white supremacists and law enforcement in places like Ruby Ridge, Idaho, and Waco, Texas.

Others, however, believe that sparking a race war would ultimately bring about the establishment of a pure white ethnic state in at least part of the current United States.

Signs of any organised effort or even participation in the violence were relatively rare. “I have not seen any clear evidence that white supremacists or militiamen are masking up and going out to burn and loot,” said Howard Graves, a research analyst at the Southern Poverty Law Center who tracks white supremacist and other anti-government extremist groups.

Some participants included heavily armed members of the militia movement, ardent supporters of the Second Amendment right to bear arms who believe it is their constitutional duty to protect citizens and businesses. Members of hate groups or far-right organisations filmed themselves, sometimes heavily armed or waving extremist symbols, at demonstrations in at least 20 cities in recent days, from Boston to Buffalo to Richmond, Virginia, to Dallas to Salem, Oregon.

A common nickname for their anticipated second Civil War is the “boogaloo”, which sometimes gets mutated into the “Big Igloo” or the “Big Luau”, prompting its adherents to wear Hawaiian shirts. Many of them use Facebook to organise despite the company’s May 1st announcement that it would remove such content.

Their flag is often a variation of the American flag, with an igloo instead of stars, one stripe replaced by a Hawaiian print and the rest showing the names of both African Americans and white people killed in confrontations with the police.

In a Facebook post from Richmond, two young white men are shown holding that flag up behind an African American woman with a hand-lettered sign reading “A knee is the new noose!!” That referred to the police action used in the death of Floyd.

Mike Griffin, a long-time activist in Minneapolis, said the demonstrations in his city attracted people he had never seen before. They included well-dressed young white men in expensive boots carrying hammers and talking about torching buildings. “I know protests, I’ve been doing it for 20 years,” he said. “People not affiliated with the protests are creating havoc on the streets.” – New York Times