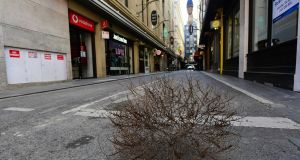 More than 25.75 million people have been reported to be infected by the novel coronavirus globally and 855,590 have died, according to a Reuters tally. Infections have been reported in more than 210 countries and territories since the first cases were identified in China in December 2019.

The Australian coronavirus hotspot state has extended its state of emergency for another six months as its weekly average of new infections dipped to 95.

The state parliament’s upper chamber passed legislation by a 20-19 vote to extend Victoria’s state of emergency, which enhances the government’s powers to impose pandemic restrictions.

The government had wanted a 12-month extension, with the current state of emergency having been due to expire on September 13th.

But the latest seven-day average has dropped into double-digits for the first time in weeks. The previous week’s average was 175 infections per day.

Thailand has reported zero locally-transmitted Covid-19 cases for 100 days in a row, joining a small group of places like Taiwan where the pathogen has been virtually eliminated.

The Southeast Asian country hasn’t recorded any community transmission since May 26th, data from the country’s health ministry on Wednesday showed. Authorities are still finding infections among travellers arriving at the tourist hotspot’s borders, but these people are quarantined and only allowed into the community after they’re recovered.

Like Taiwan and New Zealand, another country that made it past 100 days before local infections re-emerged, Thailand’s success has relied on strictly-policed borders that have been closed to foreigners for months. The strategy has come at great cost to Thailand, with its iconic beaches and cultural sites making it one of the most tourism-reliant economies in the world.

That makes the milestone a bittersweet one for the country, coming amid growing pressure from business to re-open the borders to save the ailing tourism sector, which accounted for 20 per cent of Thailand’s pre-pandemic economy. The government has in principle agreed to open to tourists again ahead of the northern hemisphere winter, but is yet to release many details about how it will do so safely.

“We contained the virus, and now is really the time to focus on the economy -- the longer we close the borders, the more damage it will have,” said Somprawin Manprasert, chief economist at Bank of Ayudhya Pcl in Bangkok.

Other tourist-reliant economies like Aruba in the Caribbean have seen a resurgence of cases after allowing travellers back in, and European countries are bracing for new waves seeded during the recent summer vacation period.

The Trump administration will send most of its newly purchased 150 million rapid Covid-19 tests to US states for schools and critical services, a White House official said on Tuesday, as New York City pushed back reopening classrooms in a deal with union leaders.

The moves came as The US Centers for Disease Control and Prevention on Tuesday issued a sweeping order temporarily halting landlords across the nation from evicting millions of tenants in what it said was an effort to reduce the spread of coronavirus.

The order covers all 43 million US residential renters as long as they meet income eligibility requirements, although an administration official said the government does not expect an “overwhelming” use of the program.

The daily number of infections has been in decline across most of the United States in recent weeks, with 36,263 reported on Monday, less than half of the mid-July peak, according to a Reuters tally.

Exceptions include Midwest states such as South Dakota, where hundreds of thousands of motorcycle riders gathered for a rally in August, and Iowa.

Mexico’s health ministry on Tuesday reported 6,476 new confirmed cases of coronavirus infections and 827 additional fatalities, bringing the total in the country to 606,036 cases and 65,241 deaths.

The government has said the real number of infected people is likely significantly higher than the confirmed cases.

The number of confirmed coronavirus cases in Germany increased by 1,256 to 244,855, data from the Robert Koch Institute (RKI) for infectious diseases showed on Wednesday.

The reported death toll rose by eleven to 9,313, the tally showed. – AP/Reuters/Bloomberg