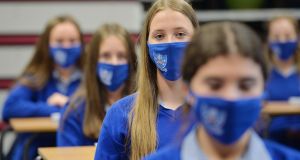 Although some will be perturbed, there is nothing at all surprising in the news that a Dublin primary school has had to send a pupil home after a positive Covid-19 test.

Everyone from the Taoiseach down has warned this is an inevitability given the virus is circulating at a time when so many pupils are finally returning to school.

A distinction has to be made between an isolated case, as this so far appears to be, and a larger outbreak, though even these can involve as few as two cases.

A further distinction should be made between cases involving pupils that arise outside schools, in the community and infections that are passed on within the classroom.

Internationally, the vast majority of infections among schoolchildren have their origins outside the education system, usually involving parent-to-child transmission in the home. If, as seems likely, this case follows this pattern, it means the school is no more “responsible” for the infection than the health service is for staff who contracted the virus while on holidays.

School outbreaks have not been a prominent feature of the Covid-19 pandemic across the world and there is no evidence to suggest children are a primary driver of transmission of the virus (unlike flu).

They can become infected and spread the disease but there is no reason to believe schools are any different from any other communal environments in terms of the risk of spreading it. Transmission rates for children are low, the Health Information and Quality Authority concluded last month after analysing the admittedly limited international evidence.

What matters now is how schools react to cases. It does seem that principals across the country have used the summer months usefully to prepare for reopening their classrooms in as safe a manner as possible.

Risk levels are being minimised through physical separation, staggered opening times, masks for teachers and older pupils, education about handwashing and other infection-control measures. Though nothing is certain, the education system has given itself the best possible chance of minimising infection.

You mightn’t know this from much of the unduly pessimistic coverage of the reopening of the education system. There were reports of 41 schools closing in Berlin due to outbreaks, but not of their subsequent prompt reopening, or the fact that no more than 41 cases were involved, or that the schools affected accounted for less than 5 per cent of all schools in the city.

The fact is that children are least affected by Covid-19 and so long as infections are identified quickly – quicker testing would help – the impact of the virus on the classroom can be minimised.