Michael McDowell: Public will not endure another lockdown

Politically, economically and socially, closing up Ireland again is not an option 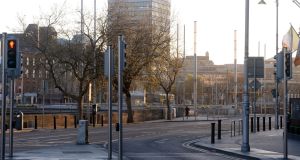 Dublin in April during the lockdown: the economically vulnerable need a performing economy at least as much as the wealthy. Poverty is a killer and destroyer of lives. Photograph: Dara Mac Donaill

There was something very unreal, in political terms, about recent commentary on the subject of another general lockdown. It seems to me to be a political impossibility. The public endured the March lockdown with patriotism, fortitude and a clear belief that it was a once-off event designed to prevent a Covid-19 tsunami from collapsing our health services’ capacity to avoid a Bergamo-like meltdown.

The phased reopening of the economy and social activities was done on a general understanding that the Irish health services had not been overwhelmed and that the Health Service Executive and other authorities had been given an opportunity to put in place the health infrastructure necessary to deal with a second wave.

We haven’t really heard as to whether the HSE has increased the availability of intensive care capacity and secured additional supplies of ventilators and personal protective equipment. Have they trained additional personnel in the meantime? Is the emergency facility in Citywest still on stand-by? Are the once-sequestered private hospitals still available on a contingency basis?

In other words, have we radically improved our hospital services so as to counter any second wave of Covid-19 or are our hospitals more or less still in the same position as they were in mid-March? If not, why not?

Do the recent upticks in community transmissions really represent an existential threat to the HSE’s capacity to deal with the virus? The fatality rate, the hospitalisation rate and the rate of admission of Covid-19 patients into intensive care do not, as of now, appear to be in crisis.

While it may well be the case that the Swedish approach resulted in an initially higher fatality rate than other countries, is it still the case that on a day-to-day basis Swedes are now suffering an egregiously higher community transmission rate compared with other comparable countries? Is there any discussion of a belated general lock-down in Sweden now?

There was a major spike in cases in Sweden in June but their newly reported cases per head of the population is much improved and is lower this week than in Ireland, as Paul Cullen has written in this newspaper.

That raises the obvious question as to why we should not now be able to live with the reality of Covid on roughly the same terms as the Swedes.

As Cullen has also written, there is considerable uncertainty as to the efficacy and efficiency of Ireland’s testing and tracing strategy. Problems with our testing and tracing system are the subject of a good deal of official and media opacity. Much faster testing seems to be technically possible. But the terribly emollient official-speak evasion that a better system is being “rolled out” defies all transparency and understanding.

And younger people in our population need to be brought with the suppression strategy rather than coerced by law to comply with the threat of unenforceable penalties. Imprisonment won’t work. Fines will not be paid. It is simply fanciful to think that gardaí can enforce limits on attendance at in-home events.

Personally, I reject the idea that the economic life of the country is somehow secondary to public health policy. The two are interwoven in an inextricable weave. Neither can exist without the other for any protracted period during a pandemic. Lives depend on the continuance of economic activity.

Peoples’ lives and their physical and mental wellbeing cannot be divorced from their livelihoods. No matter what your ideological outlook may be, you have to accept that we must face underlying realities.

For instance, our way of life now depends economically to a significant extent on the location of pharmaceutical and financial services sectors in our country. We have lost tourism for the foreseeable future. If we had to rely solely on exports of other industrial goods and agricultural output to pay for our imports, we would be set back by a half century.

The pandemic cannot be blithely dismissed as a problem of the “capitalist system” or as a good opportunity to create a utopian different society – it is an economic crisis which challenges the poor, the middle class and the wealthy alike. But people are economically vulnerable as well as being vulnerable to infection.

And the economically vulnerable need a performing economy at least as much and probably much more than the wealthy. Poverty is a killer and destroyer of lives.

The trick is to pursue a twin-track strategy of reopening the economy while protecting the vulnerable from the virus to the greatest practical extent. That is easier said than done. That involves protecting those in nursing homes and institutions and those in the community who are medically vulnerable, frail or elderly. It also involves getting people back into resource-creating economic activity.

This is the task for our leaders this autumn.