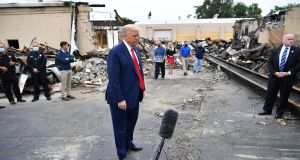 US president Donald Trump delivered a full-throated defence of America’s police forces, as he declined to condemn the shooting of African-American Jacob Blake during a visit to Kenosha, Wisconsin, on Tuesday.

Speaking after a tour of buildings and businesses that were damaged during the recent unrest that erupted following Mr Blake’s shooting by a police officer, Mr Trump said: “I really came today to thank law enforcement. What you’ve done has been incredible . . . and inspiring,” he said, describing the recent protests as acts of “domestic terror”.

Mr Trump arrived at the city, just south of Milwaukee, to an array of protesters and counter-protesters, many holding pro-Trump signs, and others supporting the Black Lives Matter movement.

Accompanied by attorney general William Barr and acting director of homeland security Chad Wolf, he toured several businesses, including a camera shop that was destroyed after 109 years in business.

Kenosha, a small city of 100,000 people, has become the latest focus of tensions over racial inequality in the US, after Mr Blake (29) was shot in the back several times by a police officer last month. While Mr Blake survived the shooting, he has been left paralysed. Subsequent protests resulted in the death of two men. A 17-year-old white male, Kyle Rittenhouse, has been charged with their murder.

Mr Trump declined to denounce the alleged actions of Mr Rittenhouse ahead of his visit to Kenosha. Instead he suggested that he had acted in self-defence, claiming that he had fallen and had been “violently attacked”.

“He probably would have been killed,” he said.

Asked directly what he would say to the family of Mr Blake, who remains in hospital, Mr Trump replied: “I feel terribly for anybody that goes through that. As you know it’s under investigation . . . it’s a complicated subject.”

As law and order emerges as a key theme in the US less than nine weeks before the presidential election, Mr Trump also criticised “reckless far-left politicians” who “continue to push the destructive message that our nation and law enforcement are oppressive or racist”.

“We have to condemn the dangerous anti-police rhetoric,” he said. “It’s very unfair.” Noting that there was some “bad apples” he said he did not believe there was systemic racism in the police force.

Mr Trump’s visit to Wisconsin may also be electorally advantageous to the president. He narrowly won the state in 2016 – the first time the state voted for a Republican president in more than 30 years and is hoping to replicate that success in November.

While the Democratic Party were scheduled to hold their convention in the mid-western state last month, ultimately presidential candidate Joe Biden did not travel there and the event was held mostly online.