President denounces violence in west coast city on way to Kenosha, another scene of unrest 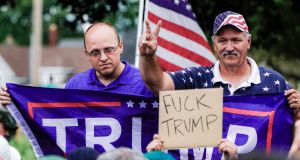 Protesters for and against Donald Trump in Kenosha, Wisconsin, on Tuesday, as the president visited. Photograph: Tannen Maury/EPA

US president Donald Trump urged the mayor of Portland, Oregon, to request support from the federal government, as he denounced the violence that has taken place in the west coast city.

Portland has witnessed daily protests for more than three months since the police killing of African-American man George Floyd in Minneapolis in late May.

Though mostly peaceful, some of the demonstrations have turned violent.

A man was shot dead on Saturday night during a clash between Black Lives Matter protesters and a convoy of approximately 100 far-right supporters, many carrying Trump flags, who had travelled into the downtown area of the city.

Speaking as he left for Kenosha, Wisconsin on Tuesday, Mr Trump hit out at the mayor of Portland, Ted Wheeler, for not calling in the national guard. Noting that demonstrators had brought their protests to the mayor’s home, he said: “He still sticks up with him because he’s a fool. Only a fool would stick up for them like that. These are anarchists. These are agitators. They’re rioters. They’re looters. They’re bad people.”

He also accused the “dishonest press” of not adequately covering the shooting on Saturday night. The victim is believed to be a pro-Trump supporter.

“The press should be ashamed of themselves.  I think the press is actually – the media is what’s fuelling this, more so than even [Joe] Biden, because Biden doesn’t know he’s alive,” he said of his Democratic rival in the presidential race.

Portland, Oregon and Kenosha, Wisconsin have both seen an uptick in violent unrest in recent weeks. However, unlike Portland, the mayor of Kenosha requested help from the federal government.

‘Burnt to the ground’

Mr Trump said that Kenosha “would have been burnt to the ground by now”, but the violence “stopped immediately upon the national guard’s arrival”.

“They put out the flame immediately,” he said. “As soon as they came in, boom, the flame was gone. Now maybe it’ll start up again, in which case, they’ll put it out very powerfully.”

Asked if he was concerned about armed militias on America’s streets, he replied: “I think a lot of people are looking at what’s happening to these Democrat-run cities, and they’re disgusting. They see what’s going on, and they can’t believe this is taking place in our country. I can’t believe it either.”

Attorney general Bill Barr, who accompanied Mr Trump to Wisconsin on Tuesday, said that the violence that followed the shooting of 29-year-old Jacob Blake by a police officer, “is simply not a legitimate response to a police shooting . . . As it progressed it became more and more distant from the issue of racial justice.”

He said that many of those involved in the nightly protests in Kenosha were from outside the state, noting that out of 175 arrests, 100 were from out of town.

While Mr Trump did not raise the shooting of Mr Blake during his visit, Mr Barr said that the incident was being investigated.

“Like all procedures and processes in our country, we do it under due process. We try to reach a dispassionate reasoned decision based on an analysis of the situation,” he said. “We cannot have mob violence in this country make our decision over the fate of individuals.”

Mr Trump strongly defended the approach of local police officers in Wisconsin during his visit there. He said while there has “some bad apples”, there were also people who “have a quarter of a second to make a decision . . . people have to understand that. It’s a very tough situation.”

He also announced $1 million of new funding for law enforcement in Kenosha, $4 million to help small businesses to rebuild, and €42 million to support public safety state-wide, including funding for additional prosecutors.