Some school staff told to ‘reuse’ masks due to shortage, union claims 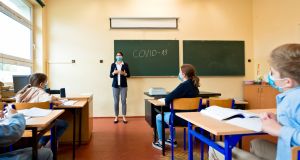 Fórsa members in the education sector were reporting that a number of schools have either refused to purchase personal protective equipment ‘or are requiring staff to reuse face masks contrary to HSE advice’. Photograph: iStock

A significant number of staff in schools are providing personal care to students without adequate personal protective equipment, the country’s largest public service union will tell the Oireachtas Covid-19 committee on Wednesday.

Fórsa, which represents non-teaching staff including special needs assistants, will also say that in one school the isolation facility earmarked for students who may develop Covid-19 symptoms was part of the school secretary’s office separated by a Perspex screen.

It will also say its members in the education sector were reporting that a number of schools have either refused to purchase personal protective equipment “or are requiring staff to reuse face masks contrary to HSE advice”.

It intends to carry out a survey of members on the issue early next week.

The union also maintained that the use of isolation rooms for students exhibiting symptoms of Covid-19 would “without doubt be problematic”.

The Association of Secondary Teachers in Ireland (ASTI) will tell the Oireachtas Covid-19 committee that the Department of Education appears “to be doing little or no planning for the possibility that there might be individual or groups of school closures”.

General secretary Kieran Christie will say that controversy over large assemblies was due to a “lack of clarity” that left schools “unsure should they follow advice [from the department] which was silent on the matter or Government advice that was well known”.

In his opening statement, Mr Christie will tell the committee that the lack of guidance “was an extraordinary omission given that we were in the middle of controversy on large congregations over in Clifden”. The union will say it has not received a response from the Minister for Health to a request for a meeting to discuss a range of concerns.

“It is regrettable that those who are effectively making the decisions on these matters are refusing to meet representatives of those directly affected by them.”

It also has concerns over parts of the guidance for reopening schools, including issues around testing, the treatment of close contacts, contact tracing and policies around symptomatic children and staff.

Several unions, including the ASTI and the Teachers’ Union of Ireland (TUI), will also demand alternative arrangements, including working from home, for teachers and students in “high risk” categories. “The ASTI is receiving a significant number of calls from teachers whose illnesses include chronic kidney disease, cancer and serious heart disease”.

It says asking teachers with these illnesses to teach sizeable groups is “unconscionable”.

The committee will also hear from the TUI, the National Parents Council, and the Irish National Teachers’ Organisation on Wednesday.

The INTO said it was imperative that a review be undertaken, by the end of September, to assess the reopening of schools and identify improvements which may be necessary.

“Unless we are vigilant and in a position to adapt quickly to changing circumstances, schools may risk a second period of enforced closure.”