‘We are going to send a signal we must treat this crisis like a crisis. This is a global emergency’ 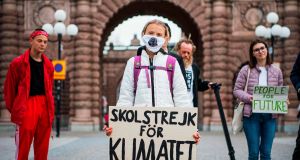 Leaders of a youth climate strike movement launched by teenage activist Greta Thunberg have said they will return to mass protests – including street actions where possible – this week, as wildfires and other climate threats surge around the planet.

“We are going to send a signal we must treat this crisis like a crisis. This is a global emergency,” Ms Thunberg told journalists in an online briefing.

The protests will be carried out both on the streets and digitally, “whichever way is safe”, she said from Sweden.

More than 2,300 protest actions have been registered for the September 25th event on the Fridays for Future website.

Coronavirus restrictions on public meetings will limit the size of many and push others online. But Argentinian youth activist Eyal Weintraub said there would also be “mass physical gatherings in some places where the health situation allows”.

As nations try to restart their economies after virus-driven slowdowns, they should ensure stimulus spending boosts climate action and reduces social inequalities, the young campaigners said.

“We need to put people over profit and any politician that cannot prioritise this needs to step down now,” said Mitzi Jonelle Tan, an activist from the Philippines.

Ms Thunberg said politicians failed to recognise how serious the threats are already from floods, heatwaves, hurricanes and wildfires that are affecting millions.

“What we keep forgetting over and over again is that people are dying today from the climate crisis,” she said. “This is destroying people’s lives.”

Given the scale of the crisis, “we are facing the need to make unprecedented changes in all aspects of society and this will require everyone”, she added.

As they look for ways to push their agenda despite the pandemic, Fridays for Future activists also said they would hold a “Mock Cop26” online meeting in November to replace the UN climate summit in Glasgow, now delayed for a year.

The event, with representatives of countries from around the world, aims to “fill the void” of the postponed talks and replicate elements of it, from keynote speeches to panel discussions and a summary statement.

On Friday, many of the activists said efforts pushing for faster climate action in their countries had been met with repression or indifference.

In the Philippines, more than 200 “environmental defenders” were killed over the last four years, Ms Tan said, with activists including herself facing intimidation on social media.

“Do I look like a terrorist to you?” Ms Tan asked. “To the Philippine government I do.”

Ms Thunberg said she felt “privileged” to be able to speak out freely on climate threats and would continue to demand a more ambitious response as the window to avoid the worst impacts of global warming closes.

“Doing our best is no longer good enough. Now we need to do the seemingly impossible,” she said.

“We will continue this fight because we have no other choice. This is a matter of life and death for way too many people,” she added. – Thomson Reuters Foundation