Hurricane Sally kills at least one, damages roads and leaves thousands without power

Remnants of hurricane dumped more than 30cm of rain on parts of Alabama, Florida and Georgia 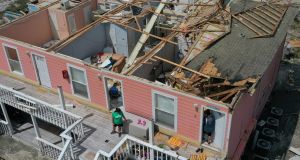 Jamie Cade (L) waiting as her mother Jody Wright walks into her apartment after the roof was damaged when Hurricane Sally passed through the area on Thursday in Perdido Key, Florida. Photograph: Joe Raedle/Getty Images

The remnants of Hurricane Sally on Thursday dumped more 30cm of rain on parts of Alabama, Florida and Georgia, killed at least one person, washed out bridges and roads and left hundreds of thousands without power.

Sally brought torrential rains and flash flooding to Georgia as it slogged to the Carolinas. At 11 am CDT (5pm Irish time), it was about 185 km (115 miles) southwest of Athens, Georgia, moving northeast at 33 km (23 miles) per hour, according to the US National Hurricane Center.

It struck Gulf Shores, Alabama, a day earlier with winds clocked at 169kph (105 mph), killed one person in coastal Alabama and another was reported missing.

Some areas were inundated with more than 60 cm (2 ft) of rain. Pensacola, Florida, east of the storm’s landfall, experienced up to 1.5m (5 ft) of flooding, and travel across the region was limited by damaged roads and bridges. Some 465,000 homes and businesses in Alabama, Georgia and Florida remained without power.

Bill Moore (47) hiked 3km (2 miles) from his home in Gulf Shores, Alabama, hoping to retrieve his car stashed inland, away from the coast. Winds tore through a hurricane shutter of his home and smashed one window and collapsed a rooftop sky light.

“It has been a long two days,” he said. “We were trying to evacuate on Tuesday, but it was too late.”

Another resident, Toby Wallace (49) said the storm surge brought 91cm (3 ft) of water into his elevated home. “There is going to be a lot of cleaning,” he said.

Democratic nominee for president Joe Biden offered prayers for residents, and called for a national response to climate change.

Utility crews and residents made repairs and cleared storm debris after Sally washed out roads and bridges and left dozens of boats pushed ashore.

Fuel prices rose again on Thursday as six refineries were offline, and OPEC promised to crack down on members not keeping to production cuts. Gasoline futures rose 2 per cent to near the high for the month.

“This year we've just got hurricane after hurricane,” said Matt Lane (23) a member of a crew from New Hampshire Electric Co-op who arrived on Tuesday from Hurricane Laura recovery efforts in Texas.

Sally was the 18th named storm in the Atlantic this year and the eighth of tropical storm or hurricane strength to hit the United States.

A tropical disturbance was brewing in the southern Gulf of Mexico on Thursday that has a 90 per cent chance of becoming a cyclone in the next 48 hours. Two other named storms were in the Atlantic, making this one of the most active Atlantic hurricane seasons on record.

Hurricanes have increased in intensity and destructiveness since the 1980s as the climate has warmed, according to researchers at the US National Oceanic and Atmospheric Administration.

Energy companies were returning Gulf of Mexico offshore oil crews and assessing damages to coastal facilities. Several said their facilities weathered the storm and were preparing to restart.–PA

1 Woman stranded in Ireland due to pandemic has ‘miracle baby’
2 Covid-19: Critical cases from NI could put pressure on services in Republic
3 US election: ‘Donald Trump needs to go. White America got what they want’
4 Australia demands answers after women taken from Qatar Airways flight and strip-searched
5 Covid-19: Public urged to ‘stay at home’ as 1,025 further cases confirmed in State
Real news has value SUBSCRIBE