Tens of thousands turned out in London for a ‘Together for the Final Say’ march calling for a second Brexit referendum. 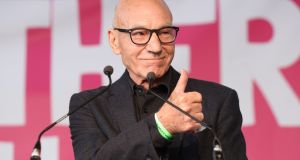 Hundreds of thousands of people marched through London on Saturday to demand a new Brexit referendum and celebrated as MPs in parliament voted to postpone Britain’s departure from the European Union.

The protesters, some having travelled for hours from around the United Kingdom to get to the capital, waved EU flags and held placards.

The crowd clogged vast stretches of central London, with thousands of people waiting to begin the march at Hyde Park by the time others had reached parliament as MPs held the first Saturday session since the 1982 Falklands war.

“I am incensed that we are not being listened to. Nearly all the polls show that now people want to remain in the EU. We feel that we are voiceless,” said Hannah Barton, 56, a cider maker from central England, who was draped in an EU flag.

“This is a national disaster waiting to happen and it is going to destroy the economy.”

After more than three years of tortuous debate, it is still uncertain how, when or even if Brexit will happen as prime minister Boris Johnson tries to pass his new Brexit deal and plots a way out of the deepest political crisis in a generation.

While Brexit has divided families, parties, parliament and the country, both sides agree Saturday and the coming days could be some of the most important in recent British history: a juncture that could shape the fate of the UK for generations.

MPs voted to withhold support for the Brexit deal until formal ratification legislation has passed, a step that will oblige Mr Johnson to seek a delay.

As the crowd watched events in parliament unfold on large screens and mobile phones they cheered and shouted “people’s vote” as they viewed the result as another chance to stop Brexit.

Many protesters carried placards, some comparing Brexit to the election of US president Donald Trump. Some wore elaborate costumes with one dressed as a banana holding a sign saying “we are ‘ripe’ for change”.

There were also effigies mocking politicians such as Mr Johnson and his key adviser Dominic Cummings.

He said: “They are our friends, members of our family, they are our colleagues.

“Over the last three years they have been feeling anxious, worried and heartbroken.

“I want you to look around.

Sir Patrick addressed the crowds from the stage, and said he had been told a “People’s Vote” was a “pipe dream” but praised the thousands of people in the crowd for continuing to support a second referendum.

He added there was “nothing democratic” about the 2016 referendum.

“People weren’t just misled, they were lied to,” he said.

As the marchers advanced some blew whistles and erupted in shouts of “Stop Brexit”. A percussion band played and a gathering sang the EU’s anthem “Ode to Joy”.

James McGrory, director of the People’s Vote campaign, which organised the march, said ahead of the protest the government should heed the anger of pro-Europeans and hold another referendum on EU membership.

“This new deal bears no resemblance to what people were promised and so it is only right that the public deserve another chance to have their say,” he said.

Footage posted to social media showed Jacob Rees-Mogg and Andrea Leadsom being heckled by People’s Vote demonstrators as they left Parliament under police escort. The demonstrators could be heard shouting “shame” as Mr Rees-Mogg and his young son passed the protesters on Millbank. Similarly, boos and shouts of “shame on you” were directed at Mrs Leadsom as she walked up the street surrounded by officers.

Campaigners are confident that the protest will rival a similar demonstration in March when organisers said 1 million people took to the streets. A rally this size would be among the largest ever in Britain.

London’s police said it does not provide estimates for the size of rallies because it is an “inexact science”, but tweeted pictures showing streets and the square outside parliament crammed with protesters.

The mood of protesters ranged from anger to despair. Many railed against political leaders championing Brexit for being elite and out of touch.

Some were young people who were unable to vote during the 2016 referendum and described the fight for another vote as the defining political event of their lives.

“If we leave the EU this is not the end of this, we will keep fighting to rejoin until that happens,” said Victoria Paynter, 17, who held a sign “check us before you wreck us”.

Some opinion polls have shown a slight shift in favour of remaining in the EU, but there has yet to be a decisive change in attitudes and many voters say they have become increasingly bored by Brexit.

Since July 2017 there have been 226 polls asking people whether they support leave or remain, according to a poll of polls by YouGov published last week. Of those, 204 have put support for remaining in the EU ahead, seven have given a lead to leave and a few have been tied.

Other polls suggest most voters have not changed their mind: 50 per cent of the public want to respect the referendum result, 42 per cent want Britain to remain in the EU and 8 per cent said they don’t know, the largest Brexit poll since 2016 carried out by ComRes found.

Supporters of Brexit say holding another referendum would deepen divisions and undermine democracy.

The challenge for pro-referendum forces is finding enough support in parliament, and even if another referendum were agreed, it would take months to organise and there would be disputes about the question – and the result would be impossible to predict. – Reuters