Kurds ‘not angels’, says Trump, as he defends Syria withdrawal

Turkish offensive ‘not our problem’, says US president, as Pence and Pompeo to meet Erdogan

US president Donald Trump played down the crisis in Syria saying the conflict was between Turkey and Syria, Trump also stated that the PKK were "more of a terrorist threat that Isis." 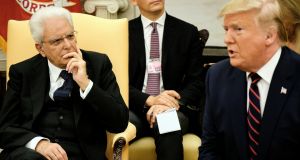 US president Donald Trump has said that the Kurds fighting in northern Syria are “not angels” as he defended his decision to withdraw US troops from the region.

Speaking as he welcomed Italian president Sergio Mattarella to the White House, Mr Trump said that the Turkish offensive was “not our problem”.

“If Turkey goes into Syria, it is between Turkey and Syria. It’s not our problem,” he told reporters, as he doubled down on his decision to order the withdrawal of approximately 1,000 US troops stationed in northern Syria, which effectively triggered Turkey’s incursion into the area last week.

The move has displaced hundreds of thousands of people, led to the deaths of soldiers and civilians, and prompted fears of a resurgent Islamic State (Isis) amid reports that prisoners being held in the region have escaped.

Mr Trump also sought to downplay America’s alliance with the Syrian Democratic Forces – the Kurdish-dominated group with whom US troops fought to defeat Isis in the country.

He also expressed a lack of interest in Russia’s role in the rapidly-moving events. “If Russia wants to get involved with Syria, that’s really up to them. They have a problem with Turkey. They have a problem at a border. It’s not our border, we shouldn’t be losing lives over it,” he said.

Mr Trump was speaking as US secretary of state Mike Pompeo, vice-president Mike Pence and other senior members of the administration prepared to leave for Ankara in a bid to encourage Turkish president Recep Tayyip Erdogan to announce a ceasefire.

Doubts over whether the visit would go ahead surfaced on Wednesday when Mr Erdogan told reporters that he would not meet Mr Pence, and would only deal with Mr Trump directly. However, he later reversed those comments.

Speaking earlier on Wednesday, Mr Pompeo said: “At this point, the vice-president and I are planning to take off later this afternoon, and we have every expectation that we will meet with President Erdogan . . . we need to have this conversation with him directly.”

It was a phone call between Mr Trump and his Turkish counterpart on October 6th, during which Mr Trump pledged to withdraw US troops from northern Syria, that triggered the current conflict. The US president also spoke to Mr Erdogan by phone on Monday just before the administration announced sanctions on Turkey over the offensive.

Ankara perceives the SDF as close to the Kurdistan Worker’s Party (PKK), a militant group opposed to the Turkish state, and has ordered Turkish arsenal and local Syrian fighters backed by Turkey to attack SDF-held areas. Mr Erdogan has said he wants to establish a “safe zone” 20 miles deep along the southern side of the Turkish border with Syria.

Speaking on Wednesday as the offensive continued, Mr Erdogan said that “terror organisations” should lay down their arms in northern Syria. “Our offer is that immediately tonight all terrorists should drop their weapons, equipment and everything, destroying their traps and leaving the safe zone we have designated”, he told a meeting of his Justice and Development Party (AKP).

Mr Trump has received pushback from Democrats and from senior members of his own party for his decision to exit Syria, a move that has been widely perceived as an abandonment of the US military’s Kurdish allies and a huge boost to Syrian president Bashar al-Assad.

The Kurds agreed a deal with Mr Assad last weekend, inviting its forces to return to regions of northern Syria it had abandoned at the height of the eight-year-old civil war.